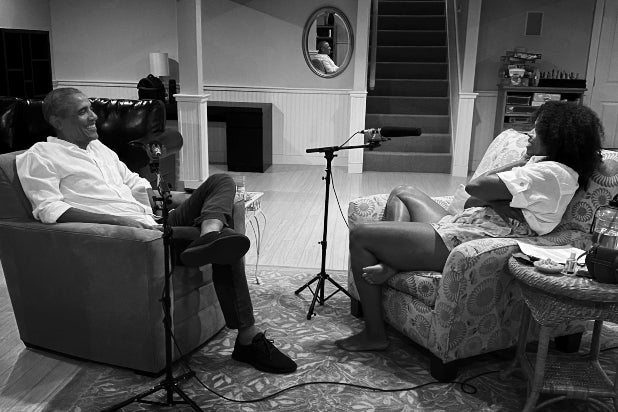 Former President Barack Obama will be the first guest on Michelle Obama’s forthcoming Spotify podcast, “The Michelle Obama Podcast,” which debuts on July 29.

“The Michelle Obama Podcast” will feature interviews with notable figures across politics, healthcare, entertainment and politics and is hosted exclusively on Spotify.

The Obamas aren’t the only politicians to pursue the podcast game recently — Former Secretary of State Hillary Clinton will soon launch a show on iHeartMedia, and presidential candidate (and former Obama VP) Joe Biden started a podcast called “Here’s the Deal” on March 29.

The Obamas will spend their time on Michelle’s first podcast episode discussing their personal relationship, life after the White House and engaging with community during coronavirus.

Forthcoming episodes of the new podcast will feature “candid and personal conversations” with a wide range of guests, including Conan O’Brien, Valerie Jarrett, Michele Norris, and Marian and Craig Robinson. Episodes will focus on relationships guests share with their family, friends and mentors and how they’ve played a pivotal role in shaping their lives, according to Spotify. The podcast is the first to stem from a deal Higher Ground Productions, the production company founded by Barack and Michelle Obama, signed with Spotify last year.

Check out a trailer for the first episode below.