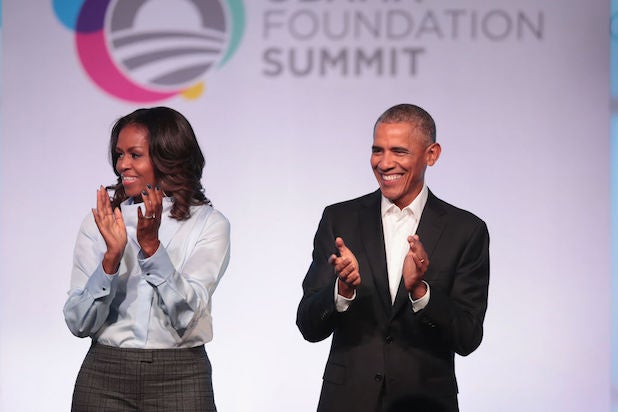 The Obamas will develop, produce and lend their voices to several podcasts during the multi-year agreement. Spotify said in its announcement the podcasts will aim to “lift up new, diverse voices in the entertainment industry.” Terms of the deal were not disclosed.

“We’ve always believed in the value of entertaining, thought-provoking conversation,” Obama said in a statement. “It helps us build connections with each other and open ourselves up to new ideas. We’re excited about Higher Ground Audio because podcasts offer an extraordinary opportunity to foster productive dialogue, make people smile and make people think, and, hopefully, bring us all a little closer together.”

The deal comes as Spotify continues to make podcasts a priority, with the music streaming giant adding several original podcasts in the last year. The Spotify-Obama partnership also marks the latest entertainment deal for the former commander-in-chief, with Higher Ground already developing multiple series for Netflix.

“We’re thrilled to have the opportunity to amplify voices that are too often ignored or silenced altogether, and through Spotify, we can share those stories with the world,” Michelle Obama said in a statement. “Our hope is that through compelling, inspirational storytelling, Higher Ground Audio will not only produce engaging podcasts, but help people connect emotionally and open up their minds–and their hearts.

Spotify Chief Content Officer added that it is a “privilege” to work with Higher Ground and highlight “underrepresented and indispensable narratives.”