Barbra Streisand voiced her concerns Saturday about ongoing efforts by Republicans to pass restrictive voting measures, saying she sees it as an attempt “to silence people of color.”

Streisand lent her voice to the National Democratic Redistricting Committee’s fundraising email blast this weekend. The EGOT winner wrote, “If we do nothing, Republicans will continue to spread lies, pass voter suppression laws, and use this year’s redistricting process to ensure they keep power for a decade or more.”

Speaking out on civil rights issues isn’t a new thing for Streisand — she’s been active since the early 1960s when she joined the anti-nuclear activist group Women Strike for Peace and sang at a Southern Christian Leadership Conference charity concert at the Hollywood Bowl in 1968. She’s also long been a queer icon, partly because she was an outspoken critic of California’s now-defunct Proposition 8 bill, which would have taken rights away from LGBTQ residents.

“I got involved in the fight for civil rights back in the 1960s, so I can’t tell you how disheartening it is to see attempts to silence people of color at the polls 60 years later,” she wrote. “The tactics Republicans are using today to restrict access to voting may have different names, but it’s the same old strategy: Keep anyone who disagrees with you – or who might look different than you – from expressing themselves in the political sphere. That’s exactly what gerrymandering and voter suppression do.”

In 2012, when some states were pushing new voter ID laws at the polls, Streisand spoke out and said, “These regressive laws are themselves the most dangerous voter fraud threatening American democracy.”

In case you need a refresher regarding the different legal attacks on democracy that Streisand is fighting back against, there is a bill that is on the verge of passing in Texas that, like many GOP voting bills up for debate now, target county election officials. Texas’ bill would include authorization for partisan “poll watchers” to monitor election sites and make it easier for judges to overturn the results of an election if there’s any indication fraudulent ballots were submitted. 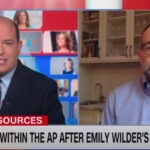 Opponents of these laws say they are designed to keep people of color, specifically Black Americans, from voting, a problem the U.S. has allowed to exist for a while, according to a CNN report. Other arguments against the laws point out, like Streisand did, that it’s also an attempt at a power grab by Republicans to influence future and “steal” elections.

All of this comes as backlash against the 2020 shift from Republican rule to Democratic rule of the White House in which former president Donald Trump lost in a fair and secure election to current president Joe Biden. Although no evidence of fraud or election tampering has been found, Republicans continue to aggressively conduct audits of ballots that were legally cast and pushed for a wave of new voting laws to be passed across the country. In addition to Texas’ ongoing debate Arizona, Iowa, Georgia and Florida have all passed similar voting laws.