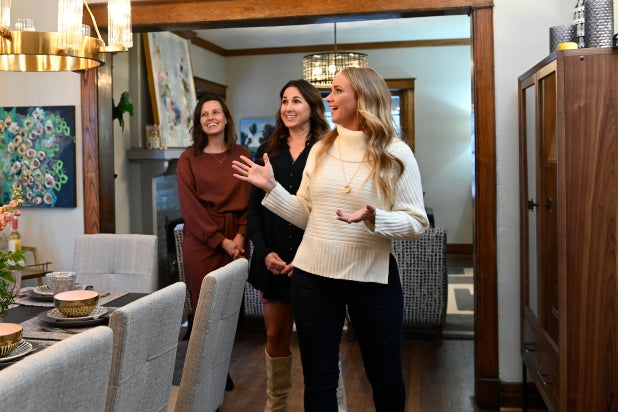 “Bargain Mansions” host Tamara Day didn’t “expect to cry” on her episode of HGTV’s latest coronavirus-era show “Design at Your Door,” but she did — and more than once. You might too.

For Night 1 of the new series — a season she guest stars on twice — Day was tasked with conceptualizing, designing, shopping for, and guiding a family via webcam in redoing their guest room. Due to HGTV’s partnership on the program, the Kansas City native who is used to renovating mansions had to buy all the supplies on Walmart.com.

Day told TheWrap she “was really pleasantly surprised” by the “variety” of items on the inexpensive big box store’s website: “It took me longer than it should have because I got sucked into it,” she said of the furniture and decor decisions.

Though her hands stay clean and no boots are required on the virtual series, Day is used to working with what is in front of her for HGTV and on her former network DIY.

Day’s “Bargain Mansions,” which just turned in its highest-rated season thus far, can no longer rely on the dictionary definitions of “bargain” or “mansions.” Having to take a little liberty from a series’ name isn’t a unique problem — it’s not even uniquely Day’s problem on HGTV alone. Really, stretching an initial theme and memorable title is not really even a “problem” at all for these home renovation shows — it’s evidence of ongoing success and the demand for more and more episodes.

“In the beginning, originally, I wanted it to be all of those 100-year-old houses that are downtown, [but] it’s just not possible to continue and make money,” Day told us of her day job-turned reality series. “Or not lose money, I guess, because there are only so many of them that are on the market at a time and it has become a really hot and popular area. And so you keep moving them a little bit farther and farther and father until we have branched out from being just the 100-year-old houses to newer homes — the ’60s, ’70s, ’80s homes — that I’m adding that character back.”

Also Read: HGTV's 'Renovation Island' Couple on Getting Lucky With Hurricane Dorian, but Not Coronavirus

What it “really boils down to” is a house that is at “the right price” and “flippable,” Day said. That goes for both “Bargain Mansions” and her non-televised projects.

Those big, old mansions in the “Four State Area,” where Arkansas, Kansas, Missouri and Oklahoma nearly touch, used to cost $20,000 to $30,000, Day said. To use her last name as a pun one final time, those days are over.

“Now they’re selling for $120,000. So in the course of four or five years, the prices have skyrocketed,” she said. “And I’m not helping that… I’m sabotaging myself!”