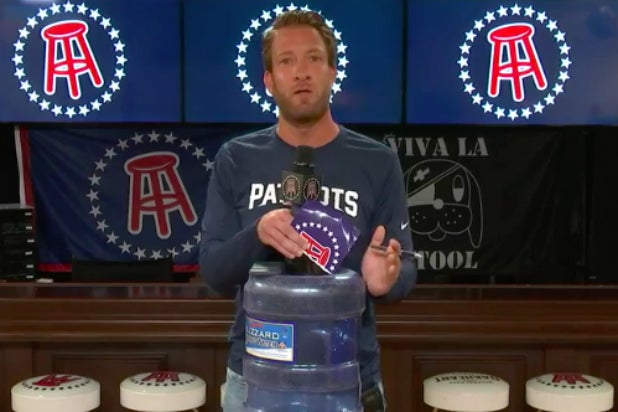 Barstool Sports may not have a spot on ESPN anymore, but they are going be living at SiriusXM Radio 24/7 soon.

The sports and men’s lifestyle brand will launch a non-stop channel on the service in January 2018, which will air nationwide on satellite radios and the SiriusXM app. The channel is meant to capture Barstool Sports’ “funny, irreverent and unfiltered approach to covering sports, men’s lifestyle, popular culture and more.”

Barstool Sports president, Dave Portnoy, announced the news via an “emergency press conference” video on the website on Monday.

“We’re excited to build on our relationship with SiriusXM. They’ve been big believers in our brand and our voice,” Portnoy said in a press release from SiriusXM. “The results already speak for themselves this past year and the sky is the limit with this channel.”

When it was announced back in October that ESPN had canceled the brand’s late-night talk show, “Barstool Van Talk,” after just one episode, Portnoy said he wasn’t exactly surprised, but it also wasn’t a huge loss in his eyes.

“ESPN needed us more than we need them,” Portnoy said during another “emergency press conference” that was live-streamed on Periscope on Oct. 23. “Everybody is saying, ‘ESPN is not cool, no one is paying attention to ESPN, they’re all paying attention to the Barstools of the world.’ Why? Because we’re authentic.”

“This is exactly why Barstool Sports has to exist,” Portnoy told fans. “We’re one of the few places — maybe the only place — on the internet where we don’t let agendas dictate what we do.”

Portnoy didn’t apologize for remarks he made three years ago about ESPN “Morning Countdown” host Sam Ponder that were widely viewed as sexist and that may have prompted the show’s cancellation, directly or indirectly. The man nicknamed “El Presidente” does wish he worded that self-described “rant” a bit differently.

Earlier that month, sports journalist Elika Sadeghi tweeted out a portion of a contract she was asked to sign for the company that requested she consent to not be offended by a number of unorthodox business practices.

“I acknowledge that I may be privy to conversations where offensive speech, (e.g. their work, scripts or roles that involve nudity, sexual scenarios, racial epithets, suggestive gestures, profanity and references to stereotypes) is utilized,” the contract read. “I understand and acknowledge that as part of my job I may be exposed to speech and conduct that is explicitly related to sex, sexual orientation, gender, national origin, religion, disability, and age.”

The response to the tweet was divisive, with it being denounced by both Portnoy and Barstool CEO Erika Nardini.

The new 24/7 channel’s lineup will feature that program, other existing Barstool podcasts and some yet-to-be announced original shows.

“Barstool has a very unique and compelling voice in today’s media landscape and SiriusXM’s uncensored national platform is the perfect way for that voice to reach and interact live with fans across the country,” read the press release from SiriusXM. “The daily Barstool Radio show that launched a year ago has been very well received and the new channel will deliver Barstool’s brand of entertainment to SiriusXM listeners on a much larger scale 365 days a year.”