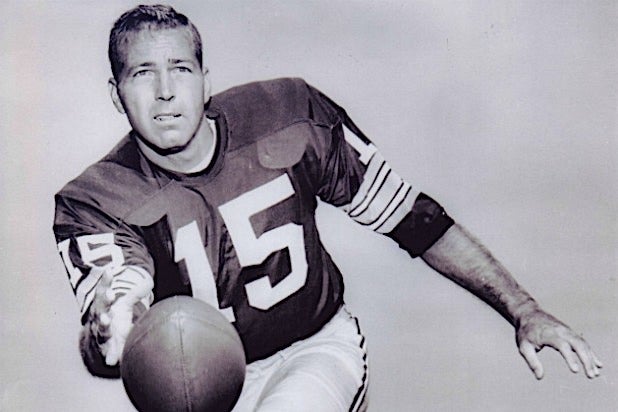 Bart Starr, legendary quarterback for the Green Bay Packers and the MVP of the first Super Bowl, died Saturday at the age of 85, according to an announcement from the team.

“We are saddened to note the passing of our husband, father, grandfather, and friend, Bart Starr,” his family said in a statement. “He battled with courage and determination to transcend the serious stroke he suffered in September 2014, but his most recent illness was too much to overcome.”

“While he may always be best known for his success as the Packers quarterback for 16 years, his true legacy will always be the respectful manner in which he treated every person he met, his humble demeanor, and his generous spirit.”

Starr is considered to be one of the greatest quarterbacks in football history, leading the Packers to five NFL championships during his pro career from 1956-71. This was prior to the merger between the NFL and the American Football League in 1970, which gave birth to professional football as it is known today.

Starr’s career hit its peak in 1966, when he led the Packers alongside head coach Vince Lombardi to a 35-10 victory over the Kansas City Chiefs in Super Bowl I. The game, held at the Los Angeles Memorial Coliseum, was the first tournament held between the AFL and NFL champions, with the Packers pulling away from Kansas City in the second half, as Starr threw for 250 yards and two touchdowns en route to becoming the first Super Bowl MVP.

On New Year’s Eve 1967, Starr made history again in the famous extreme weather football games ever played. The NFL championship game between Green Bay and the Dallas Cowboys at Lambeau Field took place under a temperature of -15 degrees Fahrenheit, with a wind chill of -36 degrees. With less than five minutes left and temperatures dropping even further to -50 degrees, Starr led the Packers offense down the field, scoring the game winning touchdown himself.

At kickoff, the temperature was -13 degrees Fahrenheit.

The 21-17 victory would become known as the “Ice Bowl,” and would become the subject of multiple sports documentaries in the coming decades. The following month, the Packers would handily defeat the Oakland Raiders 33-14 in Lombardi’s final game as head coach, with Starr being named MVP again.

Starr’s number (15) was retired by the Packers in 1973, and he was inducted into the Pro Football Hall of Fame four years later. In 1989, the NFL unveiled the Bart Starr Award, given to the player in the league who “best exemplifies outstanding character and leadership in the home, on the field, and in the community.”

Starr died at his home in Birmingham, Alabama due to complications from a stroke he suffered in 2014 that greatly impaired his ability to travel. He made his last appearance at Lambeau Field in December 2015 for the number retirement ceremony of fellow Green Bay QB Brett Favre. Starr is survived by his wife, Cherry, his son and three granddaughters.