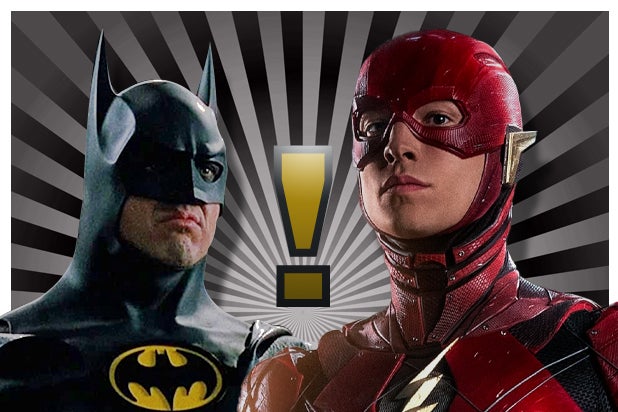 After nearly 30 years, Michael Keaton is in talks to return to the role of Batman, to appear alongside Ezra Miller in Warner Bros.’ upcoming movie “The Flash,” TheWrap has learned exclusively. Talks with Keaton are in the very early stages, it is far from a sure thing, and can go either way. No details are currently available about how big or small Keaton’s role is.

That plot will introduce general audiences to the idea of the multiverse, one of the of core concepts underpinning DC Comics. For the non fanboy set, the multiverse refers to a shifting number of alternate universes that coexist within the larger reality depicted in DC comics. Originally created to explain various contradictory changes the company’s characters experienced over decades, it allows several different versions of the same characters to simultaneously exist and, occasionally, interact. Matt Reeves upcoming “The Batman” will not be affected and Robert Pattinson’s Bruce Wayne is still viewed as the future of the franchise.

One notable component is the idea that in every single universe, Earth is always home to a larger than normal number of superpowered heroes and villains whose actions often have galaxy-spanning consequences.

Also Read: What Michael Keaton's Return As Batman Could Mean for the DCEU and the Snyder Cut

DC has been planting the seeds of the multiverse for the last several years. It was introduced in The CW’s “Arrowverse” franchise, with “Supergirl” and “Black Lightning” expressly established as being in separate universes from “Arrow,” “The Flash,” and “Legends of Tomorrow.” But most recently, during The CW’s crossover event “Crisis on Infinite Earths,” movies such as “Wonder Woman” and “Justice League” were confirmed as part of the Arrowverse multiverse when the Barry Allen played by Grant Gustin on The CW encountered Miller’s Barry Allen.

And while it’s still not known how the multiverse concept will play out in other future DC Comics movies, it certainly expands the available options for Warner Bros as it develops them. Just in case it wants to find a way to pit Joaquin Phoenix’s Joker against, say, the current version of Aquaman.

We discuss the potential greater ramifications of Keaton’s return in more depth here.

Keaton first played Batman/Bruce Wayne in Tim Burton’s 1989 blockbuster of the same name, a critical and financial success that changed how superhero films were viewed — and paved the way for the genre’s future box office domination. Keaton’s casting was initially controversial among fans, as he was primarily known for broad comedies. But his performance, particularly how he used his comedic background in his portrayal of Bruce Wayne to differentiate it from Batman, was widely praised and is now recognized as an seminal moment in comic book films.

Keaton last played Batman in 1992’s “Batman Returns,” but quit the role during development of a third film after Burton was pushed out as director and replaced with Joel Schumacher, who took the series in a campier direction with 1995’s “Batman Forever” and its much-reviled 1997 follow up “Batman & Robin.”

But “The Flash” will disregard the latter two entries entirely, and explore what Keaton’s version of Batman has been up to since we last saw him. Loosely based on the 2011 DC Comics crossover event “Flashpoint” — previously announced as the film’s title at Comic-Con 2017 — the story sees Ezra Miller’s Barry Allen travel back in time to prevent the death of his mother. The result? Allen inadvertently creates another universe protected by Michael Keaton’s Batman, now 30 years older.

“The Flash” is eyeing a Q1 2021 production start, subject to covid-19 protocols.

Keaton is repped by ICM Partners and Ziffren.