A new animated Batman series is coming to HBO Max and Cartoon Network from J.J. Abrams and Matt Reeves, the latter of whom is directing the next live-action take on the Gotham hero.

“Batman: Caped Crusader,” was given a straight-to-series order by the two WarnerMedia-owned platforms. Bruce Timm, who co-created the ’90s-era “Batman: The Animated Series,” will executive produce with Abrams and Reeves.

The new series will utilize “state-of-the-art animation techniques” and “reinvent Batman and his iconic rogue’s gallery with sophisticated storytelling, nuanced characters and intense action sequences all set in a visually striking world.”

“We are beyond excited to be working together to bring this character back, to tell engrossing new stories in Gotham City. The series will be thrilling, cinematic and evocative of Batman’s noir roots, while diving deeper into the psychology of these iconic characters. We cannot wait to share this new world,” Reeves, Abrams and Timm said in a statement.

“Batman: The Animated Series” ran for two seasons and 85 episodes and featured Mark Hamill’s lauded voice performance as The Joker opposite Kevin Conroy’s Bruce Wayne/Batman. The series spawned multiple films, including “Mask of the Phantasm” and more recently, “The Killing Joke.”

Additionally, HBO Max and Cartoon Network have handed a two-season order to a Superman animated series, “My Adventures With Superman.” “The Boys” star Jack Quaid will voice the Man of Steel. 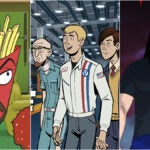 “My Adventures with Superman” catches up with 20-somethings Clark Kent, the bright and driven Lois Lane and their best friend Jimmy Olsen as they begin to discover who they are and everything they can accomplish together as an investigative reporting team at the Daily Planet.

“My Adventures with Superman” is produced by Warner Bros. Animation. Sam Register serves as executive producer. Jake Wyatt and Brendan Clogher are on board as co-executive producers and Josie Campbell (“She-Ra and the Princesses of Power”) is a co-producer.