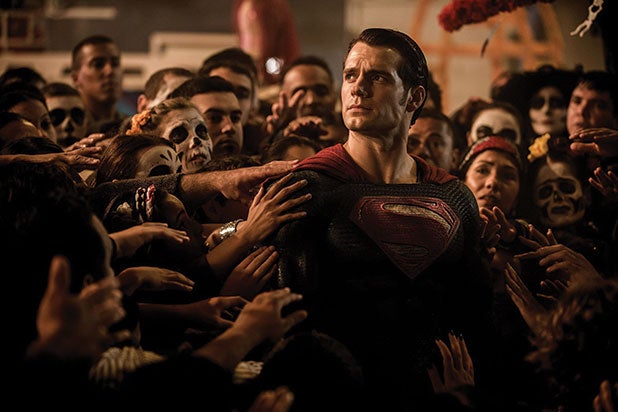 Two legendary superheroes wage a slam-bang battle in “Batman v Superman: Dawn of Justice,” but the biggest beating administered in its debut Friday was to the critics. Zack Snyder‘s PG-13-rated action epic zoomed to a record $82 million in its first day of  release at the U.S. box office for Warner Bros.

That put “Batman v Superman,” which stars Ben Affleck and Henry Cavill, on pace to deliver a record-breaking $170 million over the three days for Warner Bros. and defy searing reviews, while successfully launching the linchpin film in the studio’s ambitious five-year, 10-movie strategy built around the DC Comics superheroes.

“My Big Fat Greek Wedding 2” was the only movie opening wide against “Dawn of Justice” and  took in $7.2 million Friday, which puts Nia Vardalos‘ romantic comedy on pace for a strong $19 million opening for Universal. “Zootopia,” which came in as the No. 1 movie last week, took in $9.5 million and is headed for a $23 million second-place finish in its third weekend for Disney.

Also Read: 'Batman v Superman' Cast, Filmmakers Brush Off Lousy Reviews: 'It Is What It Is' (Video)

Befitting its over-sized profile, the $250 million “Batman v Superman” was in a saturation-level 4,242 theaters and got a huge boost from 3D, IMAX and Premium Large Format screenings. IMAX theaters alone delivered $9 million, or nearly 11 percent of the grosses, while 475 PLF runs brought in roughly $8 million on Friday. The 3,887 3D screenings brought in $33 million or 42 percent of the Friday total, according to rival studio estimates.

The premiums from those showings contributed significantly to the opening day, the biggest ever in March and the fourth-best all-time behind only “Star Wars: The Force Awakens” ($119 million), “Harry Potter and the Deathly Hallows Part 2” ($91 million) and “Avengers: Age of Ultron” ($84 million).  The record for the biggest March opening — the $152 million of “The Hunger Games” — will almost surely fall by Sunday.

First-night audiences thumbed their noses at the critics, too. They gave “Batman v Superman” a “B” CinemaScore, better than its ratings on review aggregation sites Rotten Tomatoes (30 percent positive) and Metacritic (44 percent). The same was true for “Greek Wedding 2.” which received an “A-” CinemaScore, despite coming in with even worse reviews — 26 percent on RT, 38 on Metracritic.

“The Divergent Series: Allegiant” and “Miracles From Heaven” rounded out the top five. Lionsgate’s young adult sci-fi tale brought in an estimated $3.6 million Friday and is heading for a $9.3 million second weekend. Sony’s faith-based drama took in $3.3 million and is course for a roughly $9 million Easter Sunday weekend, its second.