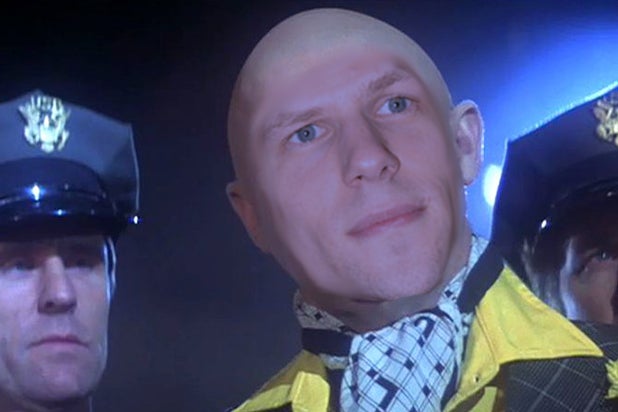 “Lex Luthor is often considered the most notorious of Superman’s rivals, his unsavory reputation preceding him since 1940,” Snyder said in the studio’s statement. “What’s great about Lex is that he exists beyond the confines of the stereotypical nefarious villain. He’s a complicated and sophisticated character whose intellect, wealth and prominence position him as one of the few mortals able to challenge the incredible might of Superman. Having Jesse in the role allows us to explore that interesting dynamic, and also take the character in some new and unexpected directions.”

The new film, being written by Chris Terrio, from a screenplay by David S. Goyer, was originally supposed to come out next summer, but Warner Bros. pushed it to 2016 to “fully realize the vision,” the studio announced earlier this month.

Irons, who won an Oscar for his lead role in “Reversal of Fortune,” takes over the role that Michael Caine inhabited for Christopher Nolan’s Batman trilogy. He most recently starred on the Showtime series “The Borgias.”

“As everyone knows, Alfred is Bruce Wayne’s most trusted friend, ally and mentor, a noble guardian and father figure. He is an absolutely critical element in the intricate infrastructure that allows Bruce Wayne to transform himself into Batman.  It is an honor to have such an amazingly seasoned and gifted actor as Jeremy taking on the important role,” the director added.

Also read: Jason Segel to Play David Foster Wallace Opposite Jesse Eisenberg in ‘The End of the Tour’ (Exclusive)

Eisenberg received an Oscar nomination for his turn as Facebook founder Mark Zuckerberg in David Fincher’s “The Social Network.” He next stars in Richard Ayoade’s “The Double” and Kelly Reichardt’s “Night Moves,” and will soon begin filming “The End of the Tour” with Jason Segel.

Warner Bros. will release the film worldwide on May 6, 2016.