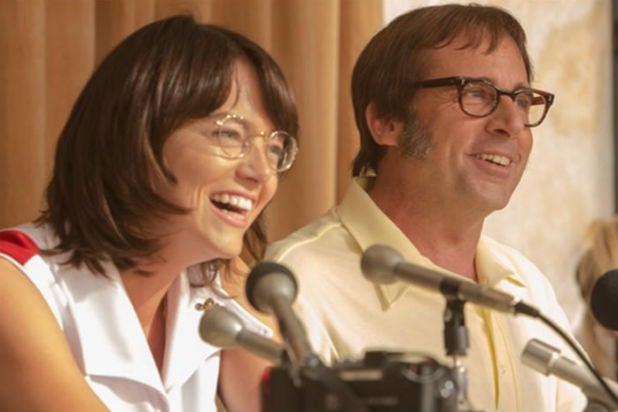 Look anywhere around you, and it’s obvious: Sexism sells. In 1973, tennis hall of famer Bobby Riggs exploited that fact to goad Billie Jean King into competing in a match he billed “The Battle of the Sexes.”

Riggs knew which buttons to push to get a whopping 90 million viewers to tune into the game. “She doesn’t stand a chance against me,” Riggs told one journalist. “Women’s tennis is so far beneath men’s tennis.” For the cheap seats, he bragged, “I want to prove that women are lousy, they stink, and they don’t belong on the same court as a man.”

Played by a sideburned and snaggle-toothed Steve Carrell in “Battle of the Sexes,” Bobby comes off as an ass and a clown but, importantly, never a buffoon. Most of us will go into Jonathan Dayton and Valerie Faris’ biopic of King with the knowledge that the female sports pioneer will trounce her showboating opponent. But it matters that Billie Jean (Emma Stone) squares off against a worthy adversary; there’s nothing impressive about being smarter than a caveman. Handsome and moving if a bit cautious, “Battle” is full of smart complexities and sensational acting, and it deserves to be considered a serious awards contender.

There was nothing fair, whatever that means in this case, about the Battle of the Sexes: Riggs was 55 and had retired from the main circuit years ago; the 29-year-old King was the reigning champion of women’s tennis but also saddled with the burden of “justifying” female professional athletics, if not the entire Second Wave of feminism, to the world.

At the drama’s outset, Billie Jean and her sardonic, skunk-streaked business partner Gladys (a career-best Sarah Silverman) form their own championship tour when the female players are offered an eighth of the prize money that male athletes get. Writer Simon Beaufoy (“Slumdog Millionaire”) weaves the story of Billie Jean’s fight for gender equality with that of her sexual coming of age.

Billie Jean’s eyes fall just before joining her husband Larry (a terrific Austin Stowell, “Bridge of Spies”) in a dance. But when the athlete meets liberated hairdresser Marilyn (Andrea Riseborough), she can’t stop looking. The scenes of blossoming eroticism, as Marilyn cuts Billie Jean’s tresses and gives the tennis star a new way of seeing herself, forge a new dialect of sensuality.

Stone gives a much more compelling and subtle performance here than she did in “La La Land,” for which she won the Best Actress Oscar earlier this year. Dayton and Faris, whose previous films include “Little Miss Sunshine” and “Ruby Sparks,” accomplish via their close-ups of Stone what Todd Haynes’ “Carol” could not: a thrumming, throbbing period romance conveyed through a series of gazes. It helps that, other than on the court, the only place where we see Billie Jean exploit her physical grace is in the lonely hotel rooms where the athlete and hair stylist discover one another.

If “Battle” betrays its subject anywhere, it’s in the meekness of the characterization of King. Hardly anywhere in sight is the ambition and hyper-competitiveness that it takes to become a record-breaking champion. (Serena Williams is still routinely pilloried for exhibiting such “unfeminine” traits today.) In a climactic scene, when Billie Jean sets the record straight about what message she wants to send with the Battle of the Sexes, she merely states, “We deserve some respect.” (Just some?)

And when Bobby suggests that their match pit “Male Chauvinist Pig [against] Hairy-Legged Feminist,” Billie Jean shoots back that she does shave her legs before hanging up on him. Women can do anything, the film implies, as long as they stay within the box of Hollywood’s standards for female likability.

Unsurprisingly, then, Carrell nearly steals the picture as a man who’s so busy hustling for a second chance that he doesn’t realize his life is actually a tragedy. The domestic scenes in which the aging gambler chafes against his wealthy wife’s (a superb Elisabeth Shue) aloof disapproval make up some of the film’s most heartfelt moments. When the huckster starts believing his own hype, everything goes downhill. (“Battle” discards the latter-day theory that an indebted Riggs threw the game after betting large on King.)

“Battle” builds gradually to the big event, which, thanks in part to Riggs’ showmanship, becomes something of a circus, replete with farm animals, palanquins manned by gladiators, and a wedding ceremony. (If Riggs wins, the bride will take the groom’s name, and vice versa.) The actual match is surprisingly tense, if disappointingly shot mostly aerially.

What’s at stake — in a clash that feels particularly resonant in 2017 — is the one between the past and the future. In these divisive times, “Battle of the Sexes” allows us all to cheer for the right side of history.