A war is coming to Gotham on The CW’s “Batwoman.” And though it may look like Safiyah and Roman Sionis are the ones waging it, the wildcard in the battle between good and evil is Circe Sionis because, according to Wallis Day — who plays both Circe and Kate Kane, currently duking it out for control of her psyche — Circe “has the ability to really f— up Gotham.”

Granted, that’s thanks in large part to her new toys. By the end of this week’s “Batwoman,” Circe has not only tricked the Bat Team into showing her the Bat Cave, but she also runs off with the suit and some dangerous toys, the most powerful of which is a chunk of Kryptonite that she uses to make some “alterations” to the suit. It’s a terrifying moment, but one that was really fun for Day to play out.

With that kind of free rein, Day really dug in. And if that crazy look in her eye as she destroyed the suit seemed a bit familiar, you can chalk it up to genetics. According to Day, her evil tendencies were naturally pretty similar to her on-screen sister Alice (Rachel Skarsten).

“It’s so funny because we picked very similar characteristics, like, character traits for the craziness,” Day says. “I actually had to change a few of mine because they were my natural gut instinct but I just thought, ‘It’s gonna clash with Alice too much.’ So I actually changed quite a few traits before I brought Circe to life.”

Ironically, at this point, Alice seems to be the key to freeing Kate from her mental prison and the control of Circe.

“Alice is absolutely the key. There’s a lot of things in Kate’s life that are precious to her and important to her, and that could be the trigger, the ‘thing,'” Day says. “But I think that there’s nothing stronger than the twin relationship and the twin bond. I think Alice is the only person that holds that key. And you’ll see that play out.”

The importance of Alice is admittedly a gut punch to the rest of the Bat Team, but perhaps for no one more than Sophie (Meagan Tandy). After a beautiful reunion last week, “Kane, Kate” pulls a full 180, with Circe openly mocking Sophie for her affections and the ease with which they could be manipulated. Even for Day, it was a tough moment to get through.

“It wasn’t Kate!” Day says. “It wasn’t Kate, and I think that’s the most important thing. Because when I read it, I was like, ‘Wait, no! That can’t happen.’ But yes, and you know what? You’re so right. She’s like, not even a soulmate; she’s like a twin flame for Kate. They belong together so bad, and me and Meagan love that. And I think when that moment of betrayal comes, it broke both of our hearts, honestly, to even do it.” 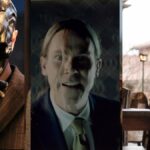 That said, Kate and Sophie fans may not need to lose hope just yet. While Day couldn’t confirm or deny the pair’s future, there’s one thing she knows with absolute confidence.

“I think, what they have is something that can never be taken away,” Day says.

But, until our Kate returns, it’s Circe at the wheel. And with the Bat Suit plus the villainous trophies collected by Batman — including a vine from Poison Ivy and some Venom — the heiress is not one to be trifled with. According to Day, even Circe’s allies aren’t necessarily allies.

“I don’t think Circe trusts anyone at this point,” Day admits. “I mean, obviously you saw in the last episode, she confronted her father, and she didn’t know who she was, and I think that that’s triggered her, in a sense. And she’s also gone on this rampage to try and get back at everyone who has ever harmed her, you know? So I think that she’s so focused on that, and she’s been hurt so much in her past that she has no reason to [trust them] and she doesn’t much care for them.”

So, when that war Safiyah was talking about does come to a head, Circe might just be playing on her own team — and absolutely taking advantage of her stolen, Kryptonite-ravaged Batsuit.

“She’s just got her own agenda,” Day confesses. “I think, to Circe, they’re all just chess pieces at this point.”