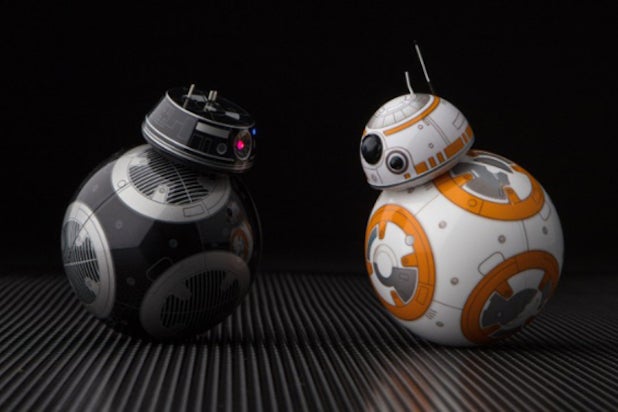 Look out, BB-8 fans. The beloved new astromech droid introduced in “Star Wars: The Force Awakens” is getting an evil twin named BB-9E.

The new droid from the Dark Side was unveiled by Disney and robotics company Sphero on Thursday as part of the “Force Friday II” toy line launch.

While BB-8 sports a white-and-orange paint job with a dome head, BB-9E, which Sphero describes as a “rolling menace,” is painted black and grey with a cylindrical head. The new droid will serve Kylo Ren and the First Order, keeping their starships running smoothly. BB-9E will make his big screen debut in Rian Johnson’s “Star Wars: The Last Jedi” this December, though whether he will cross paths with BB-8 is being kept a secret for now.

Sphero’s model of BB-9E is a remote-controlled robot that can be commanded by a smartphone app. It responds to nine commands and makes 40 sounds, and goes on sale at midnight for $149. An R2-D2 model is also going on sale for $179.

This isn’t the first time an evil droid has been introduced to the “Star Wars” universe. In Marvel’s “Star Wars: Darth Vader” comic book series last year, fans were introduced to Triple-Zero and BT-1, the evil twins of C-3PO and R2-D2. In the animated series “Star Wars: The Clone Wars,” R2-D2 did battle with R3-S6, a droid that pretended to be incompetent but was actually a double agent sabotaging Anakin Skywalker’s missions for General Grievous.

And, of course, there was the infamous interrogation droid from the very first “Star Wars” movie, which Darth Vader used on Princess Leia in the hopes that she would “discuss the location of your hidden Rebel base.”