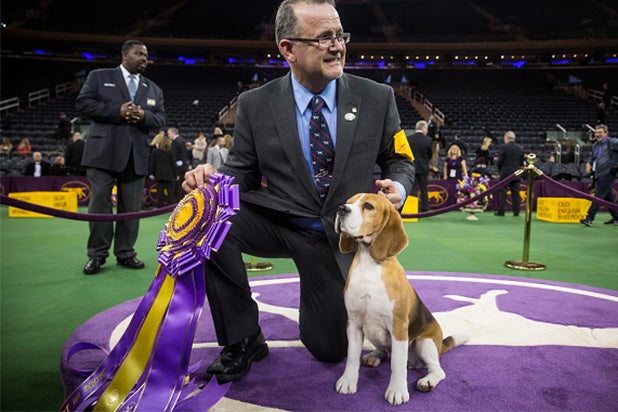 After a suspenseful pause in the action, first-time Best In Show judge David C. Merriam named Miss P the second beagle in the past seven years — and only the second beagle of all time — to take home the top title at Westminster, long considered the brass ring among dog fanciers. Good Time Charlie, a Skye Terrier, won the second place Reserve Best In Show title.

Miss P may have retrieved the ribbon Tuesday night, but the doggy’s duty is just beginning. The spunky beagle will embark on a whirlwind media tour starting first thing Wednesday morning, hitting all of the morning talk shows, cable news outlets and local television stations across New York City.

Of course she also gets to enjoy the traditional steak lunch at Sardi’s restaurant, which was almost abolished in 2012 due to health code concerns. We just wonder if she gets to eat it out of her conveniently bowl-shaped trophy.