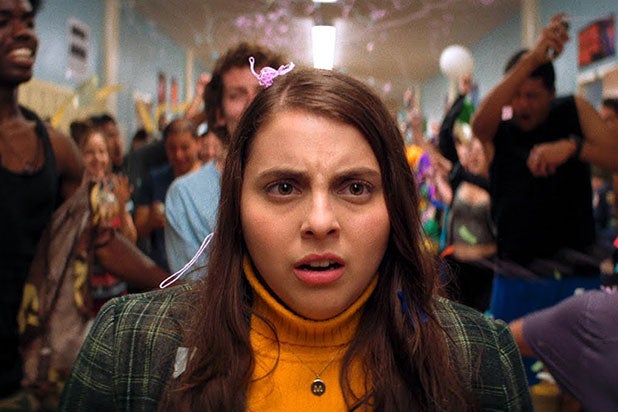 “Booksmart” star Beanie Feldstein received a Golden Globes nomination for her role in Olivia Wilde’s film on Monday — and she got to share that joy with best friends Kaitlyn Dever and Ben Platt, who were also nominated in other categories for different projects.

“I was in my bed in my apartment in New York, and I had been screaming because I had seen Kaitlyn’s name come up — I wasn’t watching, I was just looking at Twitter — I screamed so loud my roommate came in asking if I was okay,” Feldstein told TheWrap. “Then I FaceTimed her — I am so over the moon for her and her performance is one of the most exciting things to exist, and for her to be recognized… it’s for her whole year that she’s having. I would be nowhere without her, I was just over the moon.”

She added: “Then I saw Ben Platt’s name come up and then we FaceTimed… It’s just completely surreal, it feels like a morning out of my wildest dreams. It feels really surreal to know that I am going [to the Globes] for not just a movie I love — I wish I could bring everyone with me, it’s for everybody — but also, I get to be there with my closest, truest friends.”

For “Booksmart” to be recognized, Feldstein said, means the Hollywood Foreign Press Association is continuing its “beautiful lineage” of recognizing films that star young women in comedies.

“I remember when Emma Stone got nominated for ‘Easy A’ and how inspiring that was,” Feldstein said. “I think I was in high school when that happened — a performance of a young woman in a comedy was recognized in the awards circuit with other huge movies, and there is such a beautiful lineage that the HFPA always acknowledges, like with Saoirse Ronan with ‘Lady Bird’ and Hailee Steinfeld with ‘The Edge of Seventeen.’ Now, to be a part of that is so meaningful, and it speaks to ‘Booksmart’s’ ability to touch people and for the HFPA to be calling out a sleepover movie… all we wanted was for women to love it.”

“Booksmart” stars Dever and Feldstein as two high school friends, who spent most of their high school life studying. On the eve of their graduation, they decide to make up for their lack of partying and decide to cram it all into one night. Wilde directed the film based on a script by Emily Halpern, Sarah Haskins, Susanna Fogel, and Katie Silberman. Billie Lourd and Diana Silvers also star.

Feldstein was nominated in the category Best Performance by an Actress in a Motion Picture — Musical or Comedy alongside Ana De Armas (“Knives Out”), Awkwafina (“The Farewell”), Cate Blanchett (“Where’d You Go, Bernadette”) and Emma Thompson (“Late Night”).