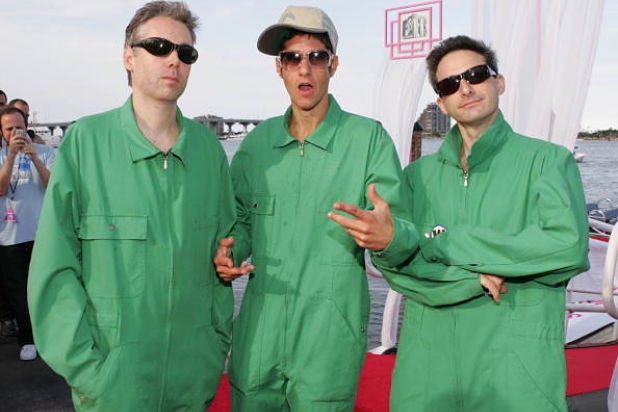 When you’ve been working on a book for over four years as the Beastie Boys have, it’s hard to know when enough is enough. However, in this marathon 592-page autobiography “BeastieBoys Book,” the iconic New York rappers have managed — in true Beasties fashion — to produce something as wide-ranging, wildly entertaining and as diverse and unorthodox as their music itself.

Written by surviving members Ad-Rock (Adam Horovitz) and Mike D. (Michael Diamond), the book traces the group’s earliest days as hardcore punks who loved Bad Brains until their end as cultural icons, when MCA (Adam Yauch) — the group’s visionary and spiritual leader — died at 47 from salivary gland cancer in 2012.

Throughout, there are odes to Yauch, who had plans to do a “The Kids Are Alright”-style documentary on the Beasties before his death, something revealed by Horovitz in the first chapter.

The book features a number of chapters written by folks other than the duo, including contributors as wide-ranging as Amy Poehler, Colson Whitehead, Spike Jonze, Wes Anderson and Luc Sante, to early New York City nightlife personalities.

As great as the self-contained stories are (how they discovered Brass Monkey, ransacking hotels, etc), it’s the minor details — like Horovitz getting into the minutiae of how to deal with cassettes — that show the surviving members at their most humorous. A number of stories will elicit smiles and tears, often at the same time, but here are some of the stand-out stories that are among the many highlights from the book.

Early in the book, Mike D. explains how the group, which featured Yauch, John Barry and Kate Schellenbach, got its name — it is from the above anagram, which Mike D. admits makes no sense. Doesn’t make it any less iconic, however.

Yauch was the free-spirited leader of the group

Horovitz opines how Yauch was a treasure-trove of knowledge and wisdom, who wanted to understand how things worked (nickname, Tech Wiz) and wasn’t afraid to meet people and take on life one adventure at a time. He met the Dalai Lama and put on the Tibetan Freedom Concert — an all-star fundraiser for a Tibetan charity where bands like U2, Pearl Jam, Radiohead, Smashing Pumpkins, A Tribe Called Quest, Sonic Youth, Foo Fighters and… you get the point, played. And perhaps the funniest memory: Yauch met a guy on the group’s flight to Australia and decided on a whim to go snowboarding with him, telling his bandmates he’d be back with them by soundcheck days later. Yauch’s absence is a subtle but overarching theme of the book, with his presence always felt.

As young hardcore punks, the Beasties released a song titled “Cooky Puss,” which served as an ode to the Carvel ice cream cake of the same name. After finding out about the synch, the group got paid, which meant they had extra cash to invest in themselves. Horovitz had eyes for a Rickenbacker guitar, but instead decided to pick up a Roland TR-808, a drum machine used to make iconic tracks including “Brass Monkey” and Run-DMC’s “Peter Piper.”

They apologize — a lot — for their early image

The surviving Beasties were not proud of their early “caricature” years. They describe that era as being a joke on macho culture, before becoming the culture that people didn’t understand was a joke itself. They fired original drummer Kate Schellenbach (for which Horovitz apologizes), discuss the original extremely inappropriate name of “Licensed to Ill” (which they say was Rick Rubin’s idea) and other rowdy behavior during that time that included Horovitz being arrested in England after being accused of throwing a beer can at a patron (he said that he didn’t do it).

Their first “holy s—” moment was a trip to England

After inking with Def Jam, which led to signing with a marketing and distribution deal with Columbia Records, the trio were flown to England in 1986 to some meet-and-greets with the label. On a night off, they went to Mick Jones of the Clash’s house (which was a very non-rock star place), where Yauch retaught the guitarist how to play “Clash City Rockers” in his studio. Later, Johnny Rotten and Clash members Joe Strummer and Paul Simonon joined the crew to take in the slasher flick “Re-Animator” after drinking with that ensemble.

They tried to pull a “Phil Collins,” and it was basically a disaster

The Beasties were on tour and playing arenas and stadiums, opening for Run-DMC. As they started to take off on the strength of “Hold It, Now Hit It,” the trio decided to play two shows in one night — opening up for their Def Jam labelmates in Oakland, then hopping on a plane for a proper headlining show in Los Angeles. The venue for the headlining gig was owned by Matt Dike, who was instrumental in the making of “Paul’s Boutique.” With members of Jane’s Addiction in attendance, Anthony Kiedis introduced the Beasties. But the gig didn’t go great and became stuff of legend… and not in a good way. Sounds issues caused the trio to end the show earlier. After seeing the group walk off in disgust, a fan named Mario Caldato told Dike that he’d be happy to use his equipment to run sound for the venue that ultimately closed not-too-long after.

Yauch performed “Walk This Way” with Run-DMC ‘s Steven Tyler and a drunk Joe Perry, who nailed it

One of the many highlights of the Run-DMC tour — who were arguably the hottest group in the land due to their remake of Aerosmith’s “Walk This Way” — came to a stadium gig in Florida. For their performance of the hit song, Aerosmith’s Steven Tyler and Joe Perry joined the rappers on-stage, but one thing was missing: a bass. Yauch happened to have one with him and was thrusted on stage to play the part… however, it was after a day of drinking. Do the math. He tried doing the tried-and-true rock move of playing back-to-back with Perry, who clearly wasn’t feeling it. Instead, what happened was some sort of hilarity where Yauch was chasing Perry across the stage to do the move. As for the song itself, Yauch nailed it, totally drunk and all.

When the Beasties toured following “Licensed to Ill,” they were implored to obtain some stage props in order to jazz up their live stage. Instead of getting something remotely standard, the Beasties had a hydraulic penis (NOT an inflatable one, as they make abundantly clear) that popped out of a box during “(You Gotta) Fight for Your Right (to Party),” which was the set closer. Unfortunately for them, they never had much use for the prop afterward, and retired many of the “Licensed to Ill” songs for years after this tour. They kept the hydraulic penis in storage for over 30 years, with no use for it… unless, of course, you count the storage facility, whose open the box every year for their holiday party.

They acrimoniously split with Def Jam over withheld royalties

Though the iconic label founded by Rubin and Simmons (who was also their manager) was instrumental in the group’s rise, the tension broke in 1987. The Beastie’s royalties were withheld over a breach of contract, they say, because they were on tour for 12 months supporting their smash debut “Licensed to Ill” and didn’t record a new album within 12 months. It led to an acrimonious split between the friends who, essentially, brought hip-hop to a wide audience. It’s an emotional chapter where the “all for one, one for all” notion of the group’s rise with their friends/business partners dramatically disintegrated. Relations didn’t smooth over until many years later.

As published in Vulture, the group’s adventurous second album took them a few years to make. Though it remains one of the most important records in hip-hop history due to its layers of sound and blending of samples, their new label, Capitol Records, wasn’t as enthused with the result. Hoping for a second “Licensed to Ill,” the label wasn’t down with the forward-sounding album and instead opted to put resources into a new Donny Osmond album — in 1989. Woof.

15 Hollywood Actors Who Had Epic Fails as Music Stars (Photos)

From Lindsay Lohan to Leonard Nimoy: These stars should have stayed in their lane