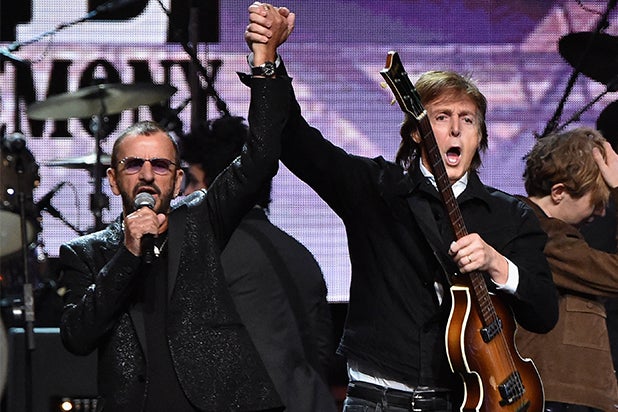 When it comes to commemorating what is perhaps their greatest musical achievement, Paul McCartney and Ringo Starr are willing to shoot for the moon and the stars.

On Thursday, the 50th anniversary of their landmark album “Sgt. Pepper’s Lonely Hearts Club Band,” both Starr and McCartney took to Twitter to mark the moment, offering particularly spacy takes on the anniversary.

Their tweets are guaranteed to raise a smile.

McCartney offered a Throwback Thursday photo of the album’s iconic cover, and also shared a tweet from NASA that explained the significance that the “Sgt. Pepper’s” track “Lucy in the Sky With Diamonds” held for the agency.

“Did you know our Lucy mission’s name has inspiration from @TheBeatles’ ‘Lucy In The Sky With Diamonds’?” NASA’s tweet read, adding the hashtag “#SgtPepper50.”

Starr, meanwhile, posted a photo of himself flashing double peace signs, in front of a backdrop featuring the moon and stars.

A Pepper-esque hat and mustache are painted on the drummer’s face in the photo. On his jacket are two patches — one featuring the bass-drum skin from the “Sgt. Pepper’s” cover, the other sporting the NASA logo.

“How great it would be for Lucy to go back in the sky with diamonds. well done Sgt Pepper and the beat goes on. Peace and love,” Starr wrote.