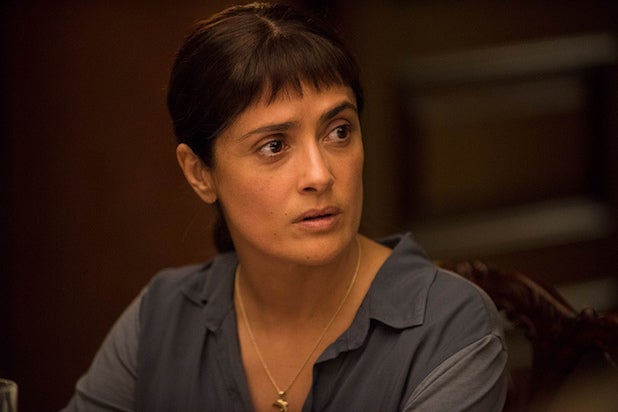 The indie movie calendar saw three highly anticipated films open this weekend: “Beatriz at Dinner,” “My Cousin Rachel” and “The Hero.” Of that trio, “Beatriz” had the most successful opening at the box office, grossing $150,160 from just five theaters for a per screen average of just over $30,000. At one of those theaters, the Landmark in Los Angeles, the film even sold more tickets than “Wonder Woman.”

Premiering at Sundance and released by Roadside Attractions and FilmNation, the film stars Salma Hayek as Beatriz, a mild-mannered immigrant therapist who spends an evening at the house of one of her wealthy clients (Connie Britton) after her car breaks down.

Beatriz is expecting a pleasant evening, until she discovers that her clients are friends with a wealthy racist named Doug Strutt (John Lithgow), leading to an intense confrontation between Beatriz and the elites that she finds herself breaking bread with.

Directed by Miguel Arteta and written by Mike White, the film has received a 78 percent rating on Rotten Tomatoes.

The Orchard’s “The Hero,” which stars Sam Elliott as a retired Western movie star who tries to make amends in his personal life after being diagnosed with cancer, also had a strong limited opening, grossing $48,414 from four theaters for a PSA of $12,104. Directed and written by Brett Haley, the film has a 74 percent RT score and will expand to 30 screens next week.

Fox Searchlight’s “My Cousin Rachel” had the widest release of the three indie films with 523 screens, but only grossed $954,000 for a PSA of $1,824. That puts the film just outside the top ten at the box office this week, with seven of the ten films above it posting higher PSAs.

Written and directed by Roger Michell and based on the novel by Daphne du Maurier, the film stars Rachel Weisz as the titular cousin whom a young Englishman seeks revenge against, but whom he also begins to fall in love with. The film has a 73 percent RT score.