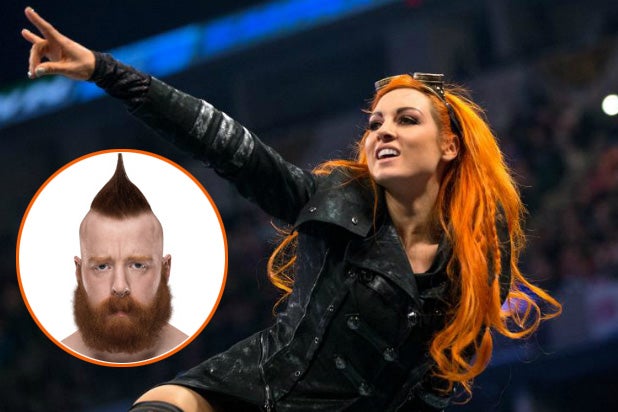 Sheamus is one of my favorite WWE Superstars. My wife, who frankly doesn’t understand why I like pro wrestling in the first place, doesn’t see his specific appeal. (She does see the appeal of his tag-team partner Cesaro, however, which is purely physical and suddenly wrestling isn’t “so stupid” anymore when he’s on screen in just a pair of briefs.)

As I’ve not yet been able to successfully explain this Sheamus thing to my better half, while I had another of Vince McMahon’s top Irish imports on the phone, I decided to ask her to dissect my highly personal attraction.

Below is that excerpt from my conversation with Dublin native Becky Lynch, who this Sunday will serve as captain of the “SmackDown Live” women’s team in a “Survivor Series'” elimination match.

Joining Lynch in her quest will be Charlotte Flair, Naomi, Carmella and Tamina Snuka. They’ll take on the capable “Raw” quintet of Alicia Fox (captain), Nia Jax, Asuka, Sasha Banks and Bayley. Only one team — and maybe just one woman — will survive, hence the pay-per-view’s title.

But back to Sheamus and his infamous mohawk …

TheWrap: Why do I like Sheamus so much?
Becky Lynch: “S—, I dunno? Because look at him! He’s this giant six-foot-something, pale as … I don’t know what. Pale as a white egg — a man with giant red hair. He comes with his mohawk — he’s just a big, giant a—kicker.

He really is huge. So, you know how you always look bigger when you’ve got a tan, right? But he’s that big and he’s pale as anything… How big would he look [tan]? He’s a colossal man.

I remember seeing him for the first time, right? I was 17, I think it was his first independent show. It was in the school hall of where I went to high school — also the same school that U2 went to [in Dublin]. And he came out there, and I was just like, ‘Jesus, that guy is just gigantic.’

You didn’t see people that size in Ireland. You just didn’t, ya know? And I was like, ‘Yeah, he’s gonna make it.'”

Also Read: Ric Flair Is Cool With Any Wrestler Using His Signature Figure 4 Leg Lock: 'Good Luck With It'

Check back with TheWrap soon for more from our interview with the “Irish Lass-Kicker” Lynch. It’s not all about Sheamus, we promise.

PPV “Survivor Series” kicks off this Sunday at 8 p.m. ET on WWE Network.