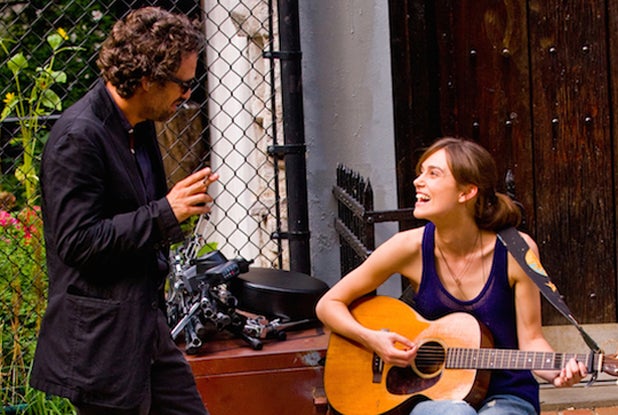 “I’ll never make a film with supermodels again,” the Irish director told the UK’s Independent in a recent interview, making reference to the many distractions the 31-year-old actress — a frequent fashion magazine cover model who also appears in ads for Chanel — brought to the film set.

He went on to criticize the two-time Oscar nominee’s acting ability. “I don’t want to rubbish Keira, but you know it’s hard being a film actor and it requires a certain level of honesty and self-analysis that I don’t think she’s ready for yet and I certainly don’t think she was ready for on that film,” Carney said.

Carney, whose 1980s-era movie musical “Sing Street” is in select theaters now, said he became “disenchanted” during the production of “Begin Again” in the United States.

“…Not that I didn’t enjoy ‘Begin Again,’ but Keira has an entourage that follow her everywhere so it’s very hard to get any real work done,” he said, adding that he yearned to return to Ireland to “make films that nobody cared about.”

According to Carney, Knightley’s “real problem” was that she didn’t sing or play guitar. “It’s very hard to make music seem real if it’s not with musicians. And I think the audience struggled a little bit with that in ‘Begin Again.'”

He said he tried his best to work with what he had, but that, ultimately, Knightley wasn’t convincing as a singer-songwriter. “I really wanted to work with musicians and actors that could play their instruments properly and sing.”

Carney saved the praise for his male “Begin Again” stars. He called Mark Ruffalo “fantastic,” and said Adam Levine was “a joy to work with.”

But he also took more jabs at Knightley: “Keira’s thing is to hide who you are and I don’t think you can be an actor and do that… It’s not like I hate the Hollywood thing but I like to work with curious, proper film actors as opposed to movie stars.”

Regarding the stellar reviews “Sing Street” has received, Carney said, “I’m very surprised; it’s a small personal movie with no Keira Knightleys in it.”