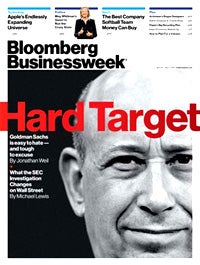 Bloomberg is rolling out its big, bad redesign of BusinessWeek this week, a new look, new sections and – most notably – “Bloomberg” and “BusinessWeek” brands getting equal billing in its logo.

“This represents the integration of two great business brands,” BusinessWeek president Paul Bascobert told Folio. “What we’re bringing out today is, I think, the most significant entry in the weekly business news category, with a goal of nothing less than becoming the most influential business magazine in the world.”

On the one hand, you’d expect this kind of bullishness. After all, this is a magazine Bloomberg bought and gutted as a reclamation project – why not have the goal of “becoming the most influential business magazine in the world.”

On the other hand, this is tough talk from a magazine that saw ad pages disintegrate by more than 33 percent in 2009, and 18 percent through the first three months of 2010.

Bascobert thinks that the ad slide was a product of the magazine getting progressively worse before Bloomberg swooped in to save it: “When you look at the research about the people who decided to leave BusinessWeek, it really was that the value equation was broken for them …They felt that for what they were paying, the product kept getting thinner and smaller and less comprehensive. I think this is a radical reversal of that.” (That sounds like a slap at the BW staffers Bloomberg axed.)

Yet, this is exactly what relaunches and redesigns are meant to do: drum up some attention for a product that advertisers, for whatever reason, abandoned. So again, it makes perfect sense.

Not that BBW’s competitors care where it comes from. After Bascobert told Yahoo that one of its rivals, Fortune, "has moved away from core business coverage,” Andy Serwer, Fortune’s managing editor, fired back:

"[That’s] crazy, preposterous rhetoric. We haven’t strayed from our mission at all. … This from the magazine that put James Cameron on the cover recently."