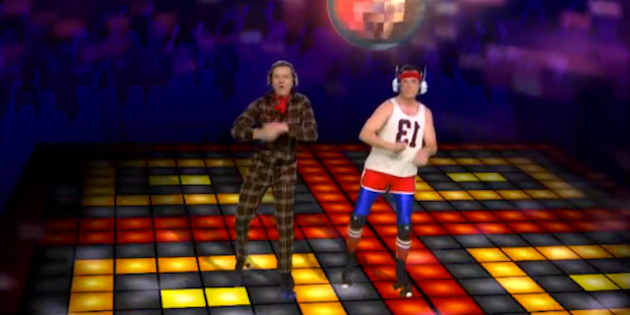 Stephen Colbert gave a behind-the-scenes look at his triumphant dance version of Daft Punk's "Get Lucky," and it turns out that what we saw on last Tuesday's show was closer to reality than you might think.

It's certainly closer than Pitchfork thought – the music site called it an "elaborate fake-out" when Daft Punk, whose appearance "Colbert" had been promoting, was not allowed to appear on the show when, at the last minute, Comedy Central sister station MTV demanded the band only appear on the upcoming VMAs.

Instead, Colbert unveiled a star-studded dance video with Bryan Cranston, Hugh Laurie, Jeff Bridges, Matt Damon, the Rockettes and Henry Kissinger before having Robin Thicke on to perform his hit single, "Blurred Lines."

Talking to former "Daily Show" writer Paul Mecurio on his podcast, Colbert said that, yes, Thicke's appearance was planned well in advance, as was the dance video. But Daft Punk's non-appearance happened at the last minute exactly as stated.

Here's what happened: Daft Punk agreed to appear on the show six weeks before it aired, but only if they didn't speak and didn't perform. Finding this "an interesting challenge," Colbert and his writing team figured out a bit that featured Daft Punk but didn't have the band doing much of anything.

They settled on the dance video, which Colbert decided was going to happen no matter what as soon as Henry Kissinger agreed to participate ("Henry Kissinger's gonna let me come in and pop and lock?" Colbert recalled saying when he found out). The video was made (Jeff Bridges was happy to be involved when he heard it was for Daft Punk, as the band had done the soundtrack to his 2010 film, "Tron Legacy") and Thicke's performance was set.

Also read: Was 'Colbert Report's' All-Star Dance Fest 'Get Lucky' Real, or an Ad for MTV?

Then, the day before the show, Colbert found out that Daft Punk was appearing on the MTV VMAs. The show had already cleared Robin Thicke's appearance with MTV (he'll also be on the VMAs), so Colbert figured he'd get the same permission for Daft Punk.

But, as he discovered a few hours before the show filmed, MTV wasn't buying it this time. "I was gobsmacked," Colbert said. "I don't understand the idea of exclusivity."

So what we ultimately saw was the result of some serious last-minute scrambling to rewrite the bit that would lead to the dance video and Robin Thicke's performance and take Daft Punk out of it entirely.

In case you missed it, here's the result: