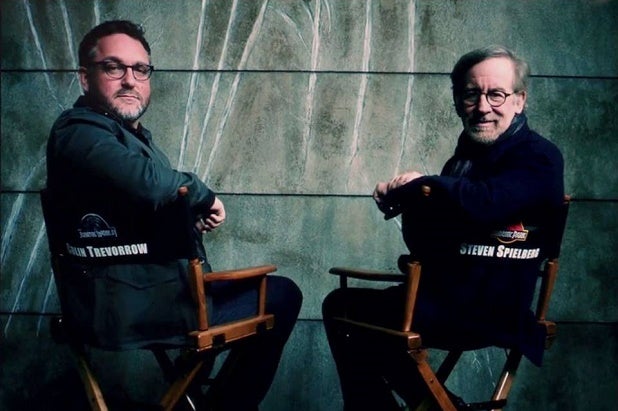 In handing the reins of “Jurassic World” to director Colin Trevorrow, Universal Pictures was taking a major gamble.

The 38-year-old director showed tremendous potential with his first and only feature film, 2012’s “Safety Not Guaranteed,” but that was an indie sci-fi comedy with a $750,000 budget. “Jurassic World” is a special effects-laden, $150 million sequel to one of the most important movies in the studio’s history, Steven Spielberg‘s 1993 classic “Jurassic Park,” and critical to Universal’s strategy for 2015.

Spielberg, who executive produced the fourth “Jurassic” film, said it was the ending of “Safety Not Guaranteed” that convinced him Trevorrow was his man.

“The last scene of that film, along with Colin himself, is what sold me,” Spielberg said. “He was completely enthusiastic, both as a filmmaker and a fan, and he had a story to tell.”

There are benefits for studios to going with an unknown or inexperienced director. They’re less expensive and in theory more amenable to suggestions from executives, and can be backed up with strong second-unit directors.

But that lack of experience can also lead to green directors who are intimidated by more established actors and overwhelmed by studio input, budget issues, media demands and other distractions.

Despite the trade-offs, green directors land pricey major projects more often than you might think.

With “Jurassic World,” which has earned mixed to strong reviews and is poised for a $110 million-plus opening weekend, Universal appears to be winning its bet. But it doesn’t always work out so well.

Here are a few examples of unknown or relatively inexperienced directors taking on major projects and how studios have fared.

James Gunn had been the writer on two modest studio hits, “Dawn of the Dead” and a “Scooby-Doo” sequel, but none of the three films he’d directed — “Slither,” “Super” and “Movie 43” — had grossed more than $10 million. But Disney was impressed enough to hand him Marvel’s “Guardians of the Galaxy,” which went on to be last summer’s biggest hit and took in $775 million worldwide.

Andrew Stanton had directed the animated hits “Wall-E” and “Finding Nemo,” but never a live-action feature, much less one with a $250 million budget like 2012’s Disney’s adaptation of the Edgar Rice Burroughs sci-fi tale “John Carter.” Weather delays plagued the shoot, and a disconnect with studio marketers resulted the studio taking a $200 million write-down when it bombed.

One of the reasons Disney gave Andrew Stanton the “John Carter” job was the success of another Pixar alum Brad Bird (“Ratatouille”), who made his live-action debut the previous year on Paramount’s “Mission: Impossible – Ghost Protocol.” It took in $695 million globally and revived the franchise and star Tom Cruise‘s career. However, his live-action follow-up was one of this year’s costliest flops, Disney’s “Tomorrowland.”

Gareth Edwards wrote, directed and financed just one film —  the 2010 British alien-invasion thriller “Monsters” — before Legendary and Warner Bros. signed him on for the 2014 remake of “Godzilla.” That one stomped to a $93 million opening and took in $535 million globally. Edwards then agreed to take on the sequel, which he’ll shoot when he’s done directing the first stand-alone film set in the “Star Wars” universe.

Kevin Costner‘s first directorial outing, 1991’s “Dances With Wolves,” was a commercial and artistic smash, grossing $424 million on a $22 million budget and winning the Best Picture Oscar. But his next directorial effort was the sci-fi saga “The Postman,” which cost $80 million to make and grossed $17 million.

Some believed that Richard Kelly’s grim and compelling 2001 debut “Donnie Darko,” spoke to a troubled new generation. The film’s cult success earned him “Southland Tales,” a $17 million sci-fi tale that starred The Rock, Amy Poehler and Sara Michele Geller. He overhauled it after receiving a terrible response in its Cannes debut, but it still bombed.

Sam Taylor-Johnson’s directing debut was a low-budget 2010 drama about John Lennon called “Nowhere Boy.” Her follow-up was considerably more high-profile: “Fifty Shades of Grey,” whose $90 million debut broke the record for an opening by a female director. The bondage drama went on to become a $570 million global hit — though Taylor-Johnson won’t be back for the two planned sequels due to reported clashes with author E.L. James.

Carl Rinsch had directed some knockout Mercedes-Benz and Heineken commercials, but never a feature film before taking on the Keanu Reeves’ action drama “47 Ronin” and its $175 million budget for Universal in 2013. It wasn’t pretty: The samurai saga opened to less than $10 million and topped out at $38 million.

Here’s a video, courtesy of Universal Pictures, in which Spielberg discusses the decision to choose Trevorrow as the director of “Jurassic World”: