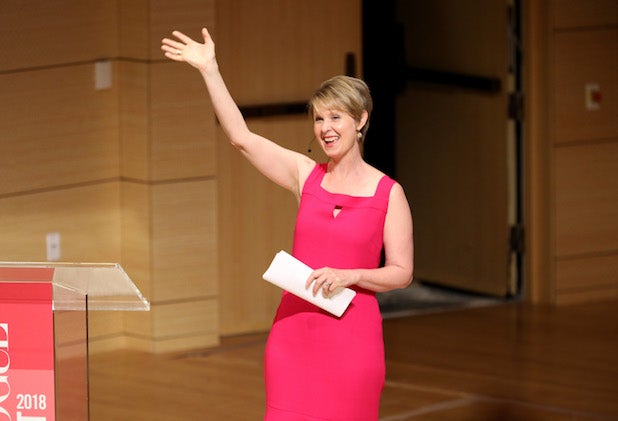 When “Sex and the City” debuted June 1998, no one wanted to be a Miranda. But 20 years later, being a Miranda just might help make you Governor of New York.

Cynthia Nixon says that she never saw her “SATC” character as a “killjoy,” as many others did, or still do. “I always loved and admired Miranda,” Nixon wrote in an essay for Refinery29 on Wednesday, which also happens to be the 20-year anniversary to the day that “SATC” first aired on HBO.

“I didn’t just love her because she was the character that I played,” Nixon wrote. “I loved Miranda because she was smart and independent and determined. And now, two decades later, it seems the world is coming around to Miranda too.”

Miranda was a hardworking, hard-charging feminist calling out misogyny at a time when that behavior was seen as being a killjoy. I also think Miranda’s flaws reflect the struggles we’ve seen within our real-life feminist movement. Read more here => https://t.co/6JzJfNwtSX

Nixon said that she admired Miranda’s loyalty and accomplishments, but also the fact that she “didn’t suppress her ambitions in order to be more ‘likable,’ nor did she try to squeeze herself into stereotypical notions of womanhood and femininity.”

Nixon continued on to say that while when the show started, she didn’t really feel like she and Miranda had much in common, but that changed over the years.

“I was surprised to find myself saying that Miranda and I had grown toward each other over the course of six seasons,” Nixon said. “I learned not to be scared of confrontation from Miranda, and I became more empowered in my own life as I stepped into the world of political activism. At the same time, she softened and grew to appreciate who she was outside of her work, becoming a mother and partnering with a husband who embodied the domestic qualities that she decidedly lacked.”

Now, Nixon says that she’s “proud to see that many of the values that Miranda embodied have spread and are more part of our discourse than ever.”

'Sex and the City': 13 Things You Probably Didn't Know About HBO Series as It Turns 20 (Photos)