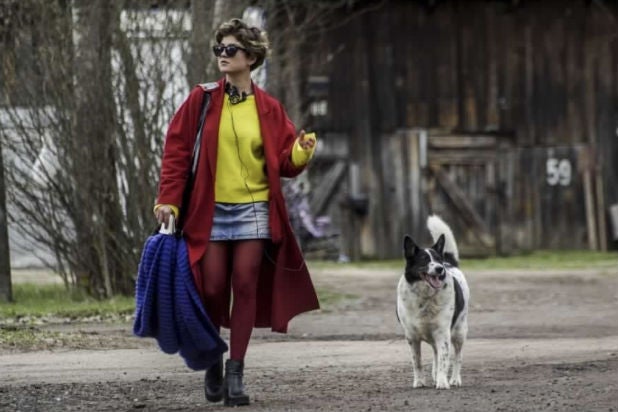 Set in the director’s native Eastern European nation in the mid-1990s, Zhuk co-wrote the story of an aspiring DJ hustling big time to flee her country for a life spinning house music in Chicago. Co-produced by Vice Films, “Swan” premiered at the Czech Republic’s Karlovy Vary International Film Festival on Saturday.

Featuring a breakout performance from star Alina Nasibullina and boasting a rare female cinematographer in Carolina Costa, the drama marks a progressive re-entry into the awards race for Belarus, as the country will submit “Swan” for the Best Foreign Language Oscar after a 22-year dry spell.

Nasibullina plays Velya, a club kid and serious DJ desperate to escape the squalor of her “liberated” homeland — which won its independence from the Soviet Union in 1994 only to elect an autocratic president who still rules to this day — for the promise of America.

Donning a blue wig and stomping around in Doc Martens, Velya flies in the face of a country mid-identity crisis. She has a law degree, but spends her days asleep and her nights raging in dank nightclubs. Her Walkman (shout out to cassette tapes) is the only company she cares to keep, as she manipulates her loved ones in the singular pursuit of her dream.

Velya steals from her mom, sells her clothes and hits up her tweaker boyfriend (a brief, amazing turn from Russian actor Yuriy Borisov) to scrape together the cash for a tourist visa and her ticket out. She forges employment by falsifying a letter from a crystal factory outside her capital city of Minsk, but it blows up in her face when the American embassy says they’ll call the phone number she gave to verify her gig.

She then travels to the remote crystal factory town in attempts to sway the owner of the phone number on the forged letter to lie for her and seal the deal on her visa. What she finds on arrival is a gruff and tight-knit family preparing for the wedding of their son, horrified by her request to sit beside their phone for a call that will implicate them in a lie.

But they don’t resist. Velya is swept into the bustle of wedding day prep, while the eldest son of the house (also the groom) teases her for her American ambitions and bristles at her criticism of their antiquated, controlled culture.

It’s here that Zhuk’s film takes a hard left, as Veyla is raped by the groom the night before his wedding. It’s a crushing and vile defeat that comes as a direct response to her laser focus on getting what she wants, a cruel reminder that women are rarely supported or rewarded when a man feels threatened by their power.

It’s a very serious incident that the film moves on from quickly (and Nasibullina shines in her character’s one vulnerable moment, warning her rapist’s younger brother that when he has sex in the future it must be consensual). Some may see it as a brash hit-and-run narrative device, but it’s supported by the context of a character who won’t be deterred no matter the circumstances.

Zhuk and Nasibullina create a character that harkens back to the enterprising, unapologetic heroines of ’80s films like “Desperately Seeking Susan,” “Working Girl” and Madonna’s underrated “Who’s That Girl?”

But Nasibullina’s Veyla is something new. You can dance to her beat or get the f— out of the way.