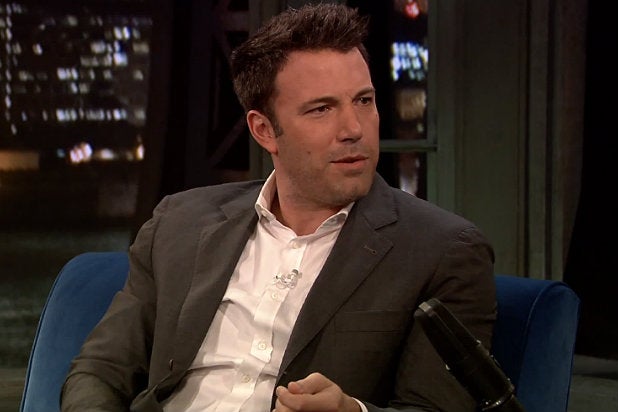 Ben Affleck has a word or two for his Batman detractors: He’s a big boy. And he can “handle shit.”

Then, apparently, he turned off the Internet.

Appearing on Jimmy Fallon and for the first time addressing the public reaction to his being cast as Batman, Affleck said he first got wind of the negative online reaction from the studio making the movie, Warner Bros.

“The people from the studio were like ‘We’re thrilled… and listen we want to talk to you because people go through this process and it can be a little trying.'”

He went on: “I said… ‘I handle shit,’ you know what I mean – I’m very tough. So I saw the announcement I look at the first comment and it’s like ‘Ben Affleck is going to be Batman’ and the first one goes ‘NOOOOOOOOOOOOOO!’ I’m like… kids we’re going to be Luddites now.”

Affleck has taken some heat from Batman fans who have vocalized their artistic differences with the decision to cast him as the superhero opposite Henry Cavill as Superman.

The studio chief Kevin Tsujihara has recently said that Affleck, 41, will play a world-weary version of the character in the reboot to be directed by Zach Snyder.

Affleck said he was skeptical when they first offered the role. “I thought ‘Well I’m not 25 man and are you sure about this?’ And they said come down we want to show you what we’re doing and it was incredible… Zach (Snyder) had this incredible take on it. Obviously you can’t do what Christian [Bale] did those movies are awesome, amazing so he wants to do something different but still in keeping with that so I thought I, … This is a brilliant way to do this, I really know how to hook into this.'”