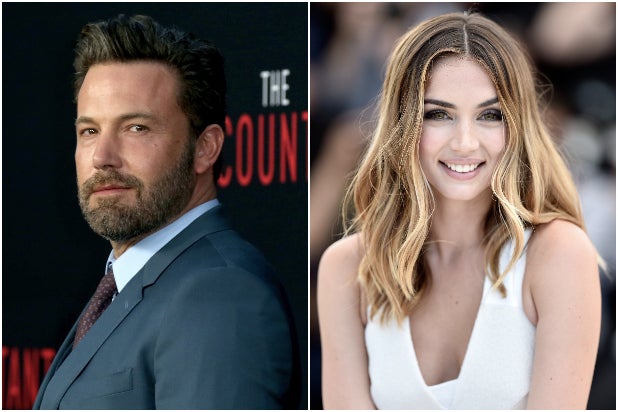 Ben Affleck and Ana de Armas are in talks to star in “Deep Water,” an adaptation of Patricia Highsmith’s novel that if it goes forward would be fully financed by New Regency, an individual with knowledge of the project tells TheWrap.

“Flashdance” and “Fatal Attraction” director Adrian Lyne is lined up to direct, making “Deep Water” his first project since 2002’s “Unfaithful.” The hope is for the project to begin production in November.

Zack Helm (“Stranger Than Fiction”) and Sam Levinson (“Euphoria”) are writing the adaptation of the novel “Deep Water,” which is a psychological thriller written by Highsmith and first published in 1957.

Affleck and de Armas are in talks to play Vic and Melinda Allen, a married couple in a small town whose loveless marriage is held together only thanks to an arrangement in which she is allowed to take however many lovers she wishes, so long as she never abandons her family. But when the husband grows jealous, he concocts a murderous plot in which slowly, many of the lovers turn up dead. The film examines the cold reality behind the facadé of life in the American suburbs.

Garrett Basch and Steven Zaillian are producing “Deep Water” along with Entertainment 360’s Guymon Casady and Ben Forkner, as well as Anthony Katagas and Arnon Milchan.

The film would likely be distributed via New Regency’s deal with Fox.

For Affleck, “Deep Water” recalls his work in David Fincher’s “Gone Girl.” He most recently starred in the thriller “Triple Frontier” at Netflix, and will next be seen in “The Last Thing He Wanted,” the next film from Dee Rees. He’s represented by WME.

As for de Armas, she’s starring as Norma Jeane in the Marilyn Monroe biopic “Blonde,” and she’ll also be seen in Rian Johnson’s “Knives Out” and “Bond 25.”