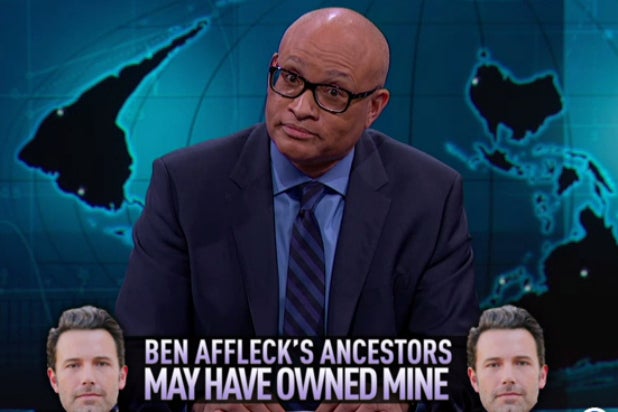 Larry Wilmore unveiled a new segment on Monday: “It Turns Out Ben Affleck‘s Ancestors May Have Owned Mine.” It probably won’t be a recurring one, thought not for a lack of humor.

“I know this sounds crazy, but Ben Affleck was on a PBS show called ‘Finding Your Roots,'” the “Nightly Show” host set up. “It turns out his roots were a little too close to ‘Roots’ roots.”

Wilmore dropped another solid joke about the Boston A-lister: “I guess Ben and his ancestor have one thing in : They both hate the Yankees.”

“The great liberal turns positively Nixonian when things get all slavey, slave, slave,” he said, before summoning the ghost of Affleck’s great-great-great grandfather.

After the ghost rips Ben for “Gigli” and “Reindeer Games,” the spirit quips: “He can’t act like I never existed — he’s just not talented enough.”

Watch the video below; the Affleck piece comes around the 3:40 mark.

The Comedy Central show’s panel also talked about Affleck — that segment is posted further down.