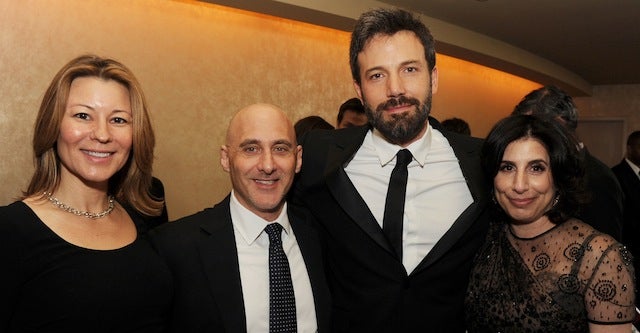 Robinov was instrumental in bringing Affleck's passion project "Argo" to the big screen, and in turn, Affleck delivered the studio its first Best Picture winner since "The Departed" in 2006. Affleck called it a "dream relationship."

Now, with a cape and cowl, Affleck is telling Hollywood: It wasn't just about Robinov.

In the wake of Robinov's very public June departure, the actor-turned-filmmaker has cemented his relationship with the studio by agreeing to return to the superhero fare that he once spurned — agreeing to play Batman in WB's untitled sequel to "Man of Steel."

Affleck's casting is a major win for Warner Bros.' new executive team, led by Kevin Tsujihara, Sue Kroll and Greg Silverman, signaling that he still has faith in the studio — and paving the way for several potential superhero collaborations.

Chief among them: the "Avengers"-like team-up "Justice League" that WB so badly covets but could never get into gear when Robinov was in charge.

See Photos: Ben Affleck Is Batman: 14 Actors Who Played the Dark Knight Before Him

It's also an about-face for Affleck, who'd sworn off superheros after being humiliated in New Regency's badly panned 2003 movie "Daredevil."

Of course, times have changed, and superheroes are in vogue now more than ever.

Christopher Nolan's Batman trilogy elevated the genre to its own art form, and Zack Snyder took the ball and ran with it; while the second-half of "Man of Steel" degenerated into an action-packed slugfest between Superman and General Zod, the first half of the film featured genuine emotion and family drama that was nearly Shakespearean in its complex stakes.

Affleck found himself on WB's radar following the 2007 Miramax thriller "Gone Baby Gone," which earned strong reviews despite fizzling at the box office. Robinov reached out to him, seeing his potential as a filmmaker; he began slipping the studio's top scripts to Affleck to gauge his interest, which marked the start of what Affleck called "a dream relationship."

After George Clooney moved his production company out of Warner Bros., the "Argo" script fell into Affleck's lap — and he hit it off with Clooney and producing partner Grant Heslov.

Robinov supported Affleck throughout the making of "Argo," which the director delivered on time and on budget. Affleck also made note of the smooth symbiosis between Robinov and Kroll, who's since taken a major step forward when her colleague left in a huff.

Affleck also swore after "Gone Baby Gone" that he wouldn't direct another movie that he didn't star in. For a while, he stuck to that, casting himself in "The Town" and "Argo." Could the Batman role be a warm-up for taking the helm of "Justice League?"

Affleck had previously been courted to direct WB's long-gestating "Justice League" movie; but he publicly shot that notion down as the noise got louder. By joining DC Comics' cinematic universe, the rumors will surely be reignited — especially since he'll come out of the experience knowing a lot more about how a major effects tentpole is put together.

Affleck had been slated to next direct "Live By Night" for Warner Bros., but the "Man of Steel" sequel is expected to significantly delay that project, which is based on the novel by Dennis Lehane.

Even outside the Batman role, Affleck's WB connections are solid; he and pal Matt Damon's production company, Pearl Street Films, is based at the studio, where they're developing a Whitey Bulger movie — as well as a drama about the battle of Bunker Hill that was written by "Argo" scribe Chris Terrio.

Affleck has also been developing an adaptation of Stephen King's "The Stand" for Warners and CBS Films. He is no longer attached to direct WB's remake of "Tell No One."

Affleck next stars opposite Justin Timberlake in the online gambling thriller "Runner Runner," and he's set to spend the fall filming the lead role in David Fincher's adaptation of "Gone Girl" for 20th Century Fox.

Affleck is repped by Patrick Whitesell at WME, as well as the law firm of Ziffren, Brittenham.