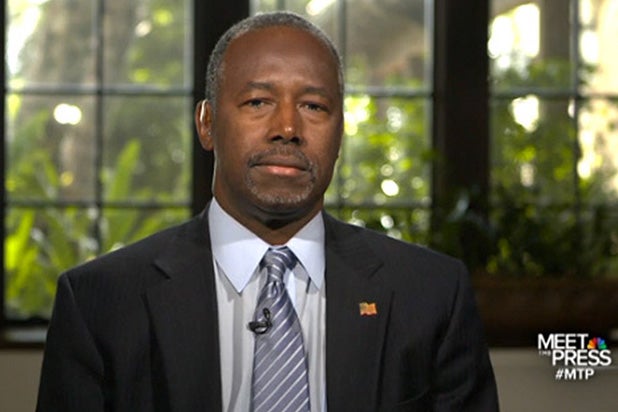 Republican presidential candidate Ben Carson says he would never support a Muslim candidate as president of the United States.

“I would not advocate that we put a Muslim in charge of this nation. I absolutely would not agree with that,” Carson said Sunday on NBC’s “Meet the Press.”

The retired neurosurgeon was responding to a question from moderator Chuck Todd, who asked if a president’s faith should matter to voters.

Todd then pressed Carson on whether he believes Islam is consistent with the constitution.

“No I do not,” he told Todd. However, Carson did say he might back a Muslim candidate for Congress.

“Congress is a different story,” Carson stated. “But it depends on who that Muslim is and what their policies are.”

The candidate’s comments came just three days after GOP frontrunner Donald Trump came under fire for failing to correct a supporter at a New Hampshire town hall, who accused President Obama of being a foreign-born Muslim and called Muslims a “problem” in the U.S.

Carson said he has “no reason to doubt” that the President was born in the U.S.

The newly released CNN/ORC survey shows Trump is still the Republican frontrunner with 24 percent of support. But that’s down 8 percent since earlier this month, when a similar poll had him at 32 percent.

It’s a different story for Carly Fiorina, who took a huge jump after the debate and is now in second place with 15 percent. That’s up from 3 percent in early September.

Carson scored 14 percent in the new poll, down 5 percent from the previous poll.

Watch the video of Carson on “Meet the Press” below.