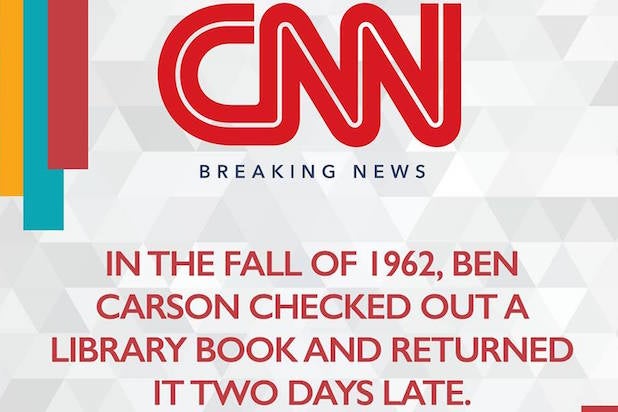 Ben Carson is digging up his dirty past ahead of Tuesday’s GOP debate so CNN, MSNBC, Huffington Post, Politico and any other “liberal media” outlets don’t have to.

The Republican candidate, who’s currently leading the pack in polls, has launched a Twitter campaign targeting news organizations that have been critical of his past.

“Ben Carson is a childhood thief,” one meme directed at Politico reads. “He got caught stealing second during a kickball game at recess.”

Carson even got his campaign staff in on the action. He tweeted out a video earlier showing staff reading “Top 10 Things the Liberal Media Thinks are Important for Voters to Know About Ben Carson.”

The retired neurosurgeon — who’s never held public office before making his presidential bid this year — said Sunday he believes he’s “getting special scrutiny” from the media, and  insisted that reporters are digging even deeper into his past because he’s doing so well in the polls.

“A lot of people are very threatened, and then, you know, they’ve seen the recent head-to-head polling against Hillary and how well I do. And, you know, they’re worried. There is no question about it,” he told CBS’ “Face the Nation” hosts. “Every single day, every other day or every week, you know, they’re going to come out with, ‘Well, you said this when you were 13.’ And the whole point is to distract the populace, distract me.”

His decision to poke fun at the media comes after CNN interviewed nine of the GOP candidate’s former classmates and friends for an investigation which found no evidence to support his stories of violent acts toward family and friends as a juvenile.

Politico also reported last week that Carson may have misstated a story about applying to and being accepted into West Point on full scholarship in his 2009 book “Gifted Hands.”

Take a look at Carson’s trolling attempts below:

The campaign staff wanted to make sure to stay ahead of any “breaking stories” in the news today. #BC2DC16 https://t.co/8taUFVAiYY — Dr. Ben Carson (@RealBenCarson) November 10, 2015