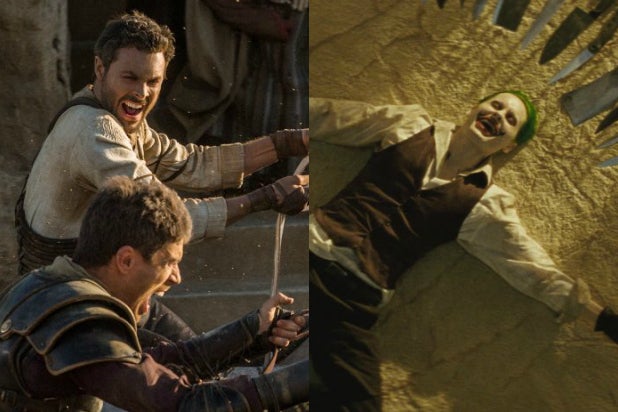 For Paramount and MGM’s “Ben-Hur” reboot, prophecies of its bad box office performance came true as the big-budget biblical feature opened to only an estimated $11.4 million this weekend.

Warner Bros.’ comic-book movie “Suicide Squad” earned the top spot during its third weekend in theaters with an estimated $20.7 million as Sony’s R-rated animated holdover “Sausage Party” came in at No. 2 with $15.3 million.

Meanwhile, Warner Bros. bromantic dramedy “War Dogs” made $14.3 million to come in at No. 3, ahead of the weekend’s two other new wide releases.

Also Read: 'Ben-Hur' to Crash and Burn at $11 Million, 'War Dogs' Moves Ahead

Laika and Focus Features’ animated movie “Kubo and the Two Strings” made an estimated $12.6 million during its debut weekend.

Meanwhile, the pricey remake “Ben-Hur” barely made it into the top five as estimates have it edging out Disney holdover “Pete’s Dragon,” which made $11.3 million. But the final ranking will crystallize once actual grosses roll in on Monday.

Earlier this week, all three new wide releases were expected to earn very similar three-day grosses of around $12 million. But “War Dogs” exceeded initial expectations as “Ben-Hur” fell behind.

What sets the biblical epic apart from the pack is that it was made for a whole lot more money than the other two other newbies.

Also Read: 'Ben-Hur' Remake Is 'Forgettable and Foolish,' and 8 Other Unholy Reviews

Opening figures for “Ben-Hur,” whose production budget was at least $100 million, put it in line to become one of the biggest box office bombs of the summer. Paramount had previously set its opening closer to $20 million from 3,084 locations — perhaps wishful thinking.

“Ben-Hur” stars Jack Huston, Toby Kebbell, Rodrigo Santoro and Morgan Freeman in the epic story of Judah Ben-Hur, who flees his homeland after being falsely accused of treason only to come back years later to seek revenge. Directed by Timur Bekmambetov, the film earned a low 31 percent Rotten Tomatoes score but a promising A- from filmgoers surveyed by CinemaScore.

Animated feature “Kubo and the Two Strings,” with a voice cast including Matthew McConaughey and Charlize Theron, could have legs in the coming weeks after opening in 3,260 theaters.

Made for about $55 million, the film is getting great reviews, with a Rotten Tomatoes score of 96 percent, plus an A CinemaScore. The Japan-set “Kubo” is also poised to make strong grosses abroad. Plus, animated features have a long history of holding more consistent interest weekend-over-weekend than live-action movies.

“Kubo,” directed by Travis Knight, follows a boy’s quest to unlock the secret of his legacy. was written by Marc Haimes and Chris Butler, from a story by Shannon Tindle and Haimes.

Finally, “War Dogs,” produced for roughly $40 million, opened in 3,258 locations. It has a 59 percent score on Rotten Tomatoes and only a B CinemaScore. Still, the film starring Jonah Hill and Miles Teller, finished ahead of the new heap.

Directed by Todd Phillips, “War Dogs” is based on a true story of two men who won a $300 million contract from the Pentagon to arm America’s allies in Afghanistan. Something of a bromance, “War Dogs” also features Bradley Cooper in a small but memorable role.