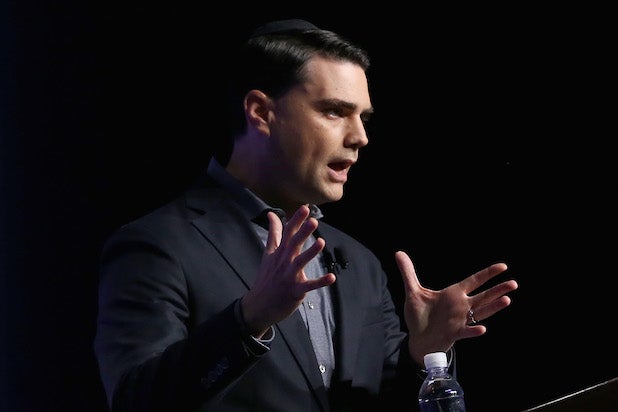 Saucey, a Los Angeles-based alcohol-delivery company, will no longer advertise on Ben Shapiro’s podcast after the conservative commentator recorded an episode at the anti-abortion March for Life event on Friday, where he said that “No pro-life person would kill baby Hitler. Baby Hitler was a baby.”

A spokesperson for the company told TheWrap that it will no longer advertise on Shapiro’s show.

Saucey is the third company to pull its ads from Shapiro’s podcast in recent days. Quip, a Brooklyn-based subscription toothbrush company, was the first to pull its advertising on Friday, followed by the meditation app Calm on Saturday.

“Our mission is to make good oral health more accessible to everyone, and podcast advertising is one way we’re able to realize this,” Quip said in a statement.

“However, following one of our ads being read in a venue we did not endorse, we have chosen to discontinue our advertising relationship with this show,” the company continued. “We are also taking steps to ensure all of our advertising partners are aligned with our oral health mission and values.”

Calm announced its move to drop Shapiro’s show on Twitter, stating simply the company does “not align with this message. We’re pulling our sponsorship.”

Shapiro, who is an Orthodox Jew, drew criticism during a speech at the March for Life Rally over the weekend, when he said that he was so pro-life he would not “kill baby Hitler.”

The Daily Wire founder read ads for Quip toothbrushes and ZipRecruiter at the rally, which led Quip and Calm to drop him.

Ben Shapiro at March for Life: "The truth is no pro-life person would kill baby Hitler. Baby Hitler was a baby." pic.twitter.com/PPgQcbWSrq