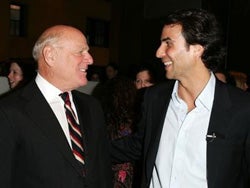 The company, a joint venture owned by Barry Diller’s IAC Corp., announced on Friday it is teaming with actors Will Arnett and Jason Bateman to develop Electus’ sponsor-driven digital projects through the pair’s new production company, called DumbDumb.

With production help from Electus and IAC-owned CollegeHumor.com, Arnett and Bateman will work with advertisers to create digital commercials – as well as short- and long-form programs — for distribution across multiple media platforms, including television and film.

In addition to the digital partnership, Electus will also have a first-look deal and retain international distribution rights on all of DumbDumb’s content.

Silverman’s company also announced on Friday that it partnering with Yahoo as a distributor.

And according to the New York Times, Silverman said he has signed his friend Ryan Seacrest to a contract with Electus for “multiple projects.”

In July, Silverman left his high-profile job as NBC Entertainment co-chairman to partner with Diller on the new venture – ending two rocky years at the top of the Peacock network.

"I had always thought Ben Silverman was wrong for the NBC job,” Diller told TheWrap in July. “He’s such a natural entrepreneur, such a natural productive selling force that I’m sure this is the right configuration for him."

Electus is being capitalized by IAC at about $125 million, according to a Wrap report in October, when the name of the company was unveiled.

Silverman was then said to be in the process of closing deals with content creators including Seacrest, "SNL" chief Lorne Michaels and Ben Stiller, to partner with advertising brands.