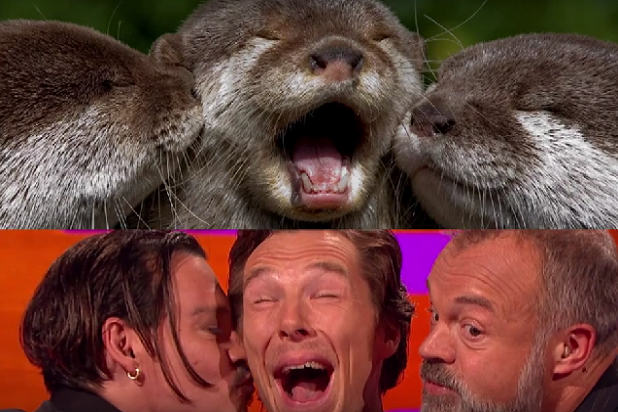 Should anyone doubt Benedict Cumberbatch‘s otter-mimicking skills, look no further than this video.

“Sherlock” star Cumberbatch appeared on “The Graham Norton Show” on Friday with his “Black Mass” costar Johnny Depp to promote the gangster drama in the U.K., and to confirm the Internet’s long-standing belief that he resembles an otter.

Host Norton dredged up the Cumberbatch-as-otter meme during the pair’s appearance on the show, lamenting the recent lack of side-by-side photographic comparisons on the web recently. So he offered the actor an opportunity to replenish the stock, presenting images of otters for Cumberbatch to replicate.

Needless to say, the actor cracked it wide open like a clam shell, delivering one uncanny resemblance after another.

The exercise took an especially aww-some turn when Norton presented a photo of an otter being nuzzled on each side by — yup — other otters. Depp and Norton gamely joined in to re-create the photo, with Depp planting a smooch on Cumberbatch’s cheek in the interest of realism. And humor.

We’re pretty sure Whitey Bulger never engaged in such chicanery, but it made for grand television.

Watch Cumberbatch take things to a whole otter level in the video.