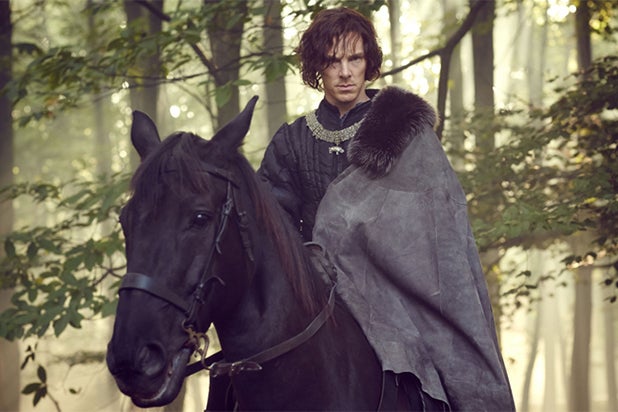 Benedict Cumberbatch is ready to get Shakespearean in the first photo released from “The Hollow Crown: The War of the Roses,” which commenced principal photography in the United Kingdom on Wednesday.

“The Hollow Crown: The War of the Roses” is a three-film series adaptation of Shakespeare’s plays “Henry VI” (in two parts) and “Richard III.” It’s also a continuation of 2012’s “The Hollow Crown” series, which featured Tom Hiddleston as King Henry V.

Also read: TCA: Tom Hiddleston on Move from ‘Avengers’ to Shakespeare – Loki Is ‘Quite a Shakespearean Villain’

“The Hollow Crown: The War of the Roses” is a Neal Street co-production with Carnival/NBCUniversal and Thirteen Productions airing on BBC Two. In the U.S., the series will be transmitted on PBS by “Great Performances” produced by Thirteen for WNET.

“After the critical and popular success of the first part of ‘The Hollow Crown’ — and seven years after we very first suggested the idea to the BBC — I am delighted to announce the start of principal photography on the second half of this magnificent epic story,” said Sam Mendes, executive producer for Neal Street Productions. “Yet again we have assembled an amazing cast — led by Benedict Cumberbatch, Judi Dench, Hugh Bonneville and Sophie Okenedo, amongst many others — under the direction of the hugely talented Dominic Cooke. I’m very excited indeed to see them all bring the rest of this astonishing story to life.”