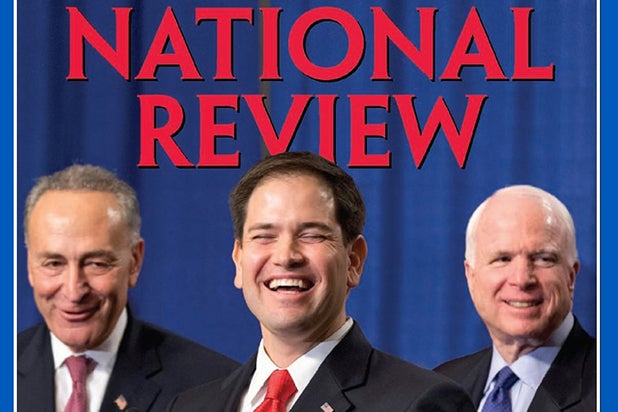 BuzzFeed political reporter Benny Johnson was fired in July in the wake of a serial plagiarism scandal. He found a new job recently as the social media director of the National Review Online, one of many sources from which Johnson plagiarized.

“Benny made a terrible mistake,” said Rich Lowry, editor of the National Review, in a statement obtained by Politico. “But he has owned up to it and learned from it. He’s a talented journalist, with obviously a lot to contribute. He knows he’s joining a storied institution at NR, and we look forward to his helping us carry on our mission across all platforms.”

BuzzFeed investigated the scandal internally and found Johnson, who had written over 500 stories for the site, had committed 41 acts of egregious plagiarism. The acts ranged from paraphrasing stories at various publications without proper attribution to copying entire sentences from Wikipedia entries. Editor-in-chief Ben Smith announced Johnson’s firing in a message posted on the site in July.

“We have scores of aggressive reporters around the United States and the world, holding the people we cover to high standards. We must — and we will — hold ourselves to the same high standards,” Smith wrote in a note highlighting Johnson’s infractions. “We have more responsibility now than ever to get it right, to keep raising our standards and to continue getting better.”

Johnson tweeted out an apology just a few days later. “To the writers who were not properly attributed and anyone who ever read my byline, I am sincerely sorry,” he said.

Honored to be joining the incredible team at @NRO.

The National Review, founded in 1955, is a bi-monthly publication that describes itself as “America’s most widely read and influential magazine and website for conservative news, commentary and opinion.” The National Review Online is the magazine’s web version.