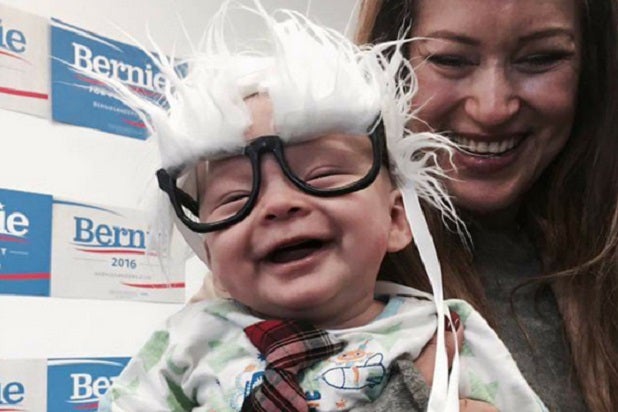 Olivehe infant who gained Internet fame as the “Bernie Baby,” has died at four months old.

Oliver passed away from Sudden Infant Death Syndrome (SIDS) on Feb. 25, according to an online memorial for the child.

A wake/viewing will take place Monday, March 7, with the funeral occurring on Tuesday, his mother, Susan Lomas, said on Twitter.

“Please come share w/us the short, beautiful life of Oliver who will be greatly missed but not forgotten,” Lomas tweeted in her announcement of the services.

Lomas-Davis, from Los Angeles, California, gained fame a few weeks ago at a Las Vegas campaign stop for Democratic presidential candidate Bernie Sanders, at which the infant was dressed as the candidate in glasses, a tie and a white wig.

The child’s aunt, Anastasia Lomas, has set up a GoFundMe campaign with funds going toward the wake, funeral and burial expenses, as well as counseling for the family. As of this writing, the campaign has raised more than $18,000.

“This amazing little boy will be laid to rest at Forestlawn in the Hollywood Hills,” the crowd funding page states. “Born 10/17/2015. Happiest baby ever! Tragically taken by SIDS.”

#berniebaby Please come share w/us the short, beautiful life of Oliver who will be greatly missed but not forgotten pic.twitter.com/P0eGITdwzz