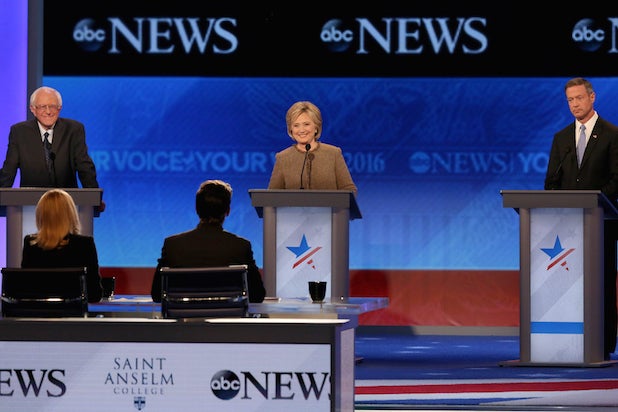 “Yes, I apologize,” the Vermont senator said when asked whether Clinton was owed an apology. “Not only do I want to apologize, I want to apologize to my supporters. This is not the kind of campaign that we run. If I find anyone else involved in this, they will be fired.”

Sanders’ comments came after a glitch in the Democratic party voter database allowed for Sanders’ staffers to access Clinton’s private files. One Sanders staffer was fired after the incident was discovered.

Here are seven takeaways from the televised event:

1. Clinton takes the high road
The data breach left Clinton with two options: Give Sanders a pass, as he did with her use of a private email server during the first debate, or use the opportunity to come down hard on the Vermont senator. But the former Secretary of State took the high road.

“Obviously, we were distressed when we learned of it, because we’ve worked very hard … and so now that I think that we’ve resolved your data, agreed on an independent inquiry, we should move on,” Clinton said following Sanders’ apology. “Because I don’t think the American people care all that much.”

“Guns in and of themselves, in my opinion, will not make Americans safer. We lose 33,000 a year already to gun violence. Arming more people — to do what? — is not the appropriate response to terrorism,” Clinton said.

Calling for background checks and the closure of loopholes that allow easy purchases at gun shows, Sanders said, “I’m not going to say that everybody’s in agreement — it’s a divided country on guns. But there is a broad consensus on gun safety regulation.”

Former Maryland Gov. Martin O’Malley came out swinging, saying, “Secretary Clinton changes her position on this every election year, it seems. What we need on this issue is not more polls. We need more principle.”

“He is becoming ISIS’ best recruiter,” Clinton said, pointing to Trump’s proposal to ban Muslims from entering the United States.

“He thinks low wages are a good idea,” Sanders said.

4. Clinton and Sanders disagree on how to handle Syria
Sanders took a shot at Clinton on her handling of Syria, saying she was “too much into regime change and too aggressive without knowing what the consequences may be.”

Clinton countered that Sanders had voted for regime change in Libya. She said that she had advocated the ouster of Syrian President Bashar Al-Assad.

But Sanders stated, “We have got to get our foreign policy and our priorities right. It is not Assad who is attacking the United States — it is ISIS.”

5. O’Malley takes jab at his rivals’ older age
The 52-year-old O’Malley got a bit of a jab in at his much older opponents.

When debating military strategy, O’Malley asked, “Can I offer a different generation’s perspective on this?”

Former Secretary of State Hillary Clinton is 68 and Sen. Bernie Sanders is 74.

“Everybody should!” Clinton shot back, to thunderous applause.

“I have said I want to be the president for the struggling, the striving and the successful. I want to make sure the wealthy pay their fair share, which they have not been doing. I want the ‘Buffett rule’ to be in effect, where millionaires have to pay 30 percent,” Clinton added.

But Sanders gave a much different answer when Muir asked whether corporate America would love him.

“No, I think they won’t,” Sanders said to cheers from the crowd. “They ain’t gonna like me, and Wall Street is gonna like me even less.”

Muir said he expected Clinton back shortly, and started a question for Bernie Sanders. But before he could finish the question, Clinton walked on the stage to applause from the audience, only saying, “Sorry.”

7. “Star Wars: The Force Awakens” gets a mention
Clinton scored some major points with the crowd with a “Star Wars” reference, ending her closing remarks with, “Thank you, good night and may the Force be with you.”