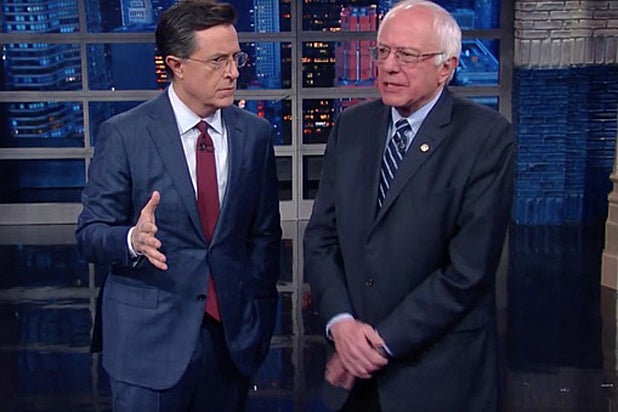 The late-night CBS host, who grew up in Charleston, South Carolina, showed off his best southern charms for the Democratic presidential candidate by offering him beer and boiled peanuts as a lesson on his home state before Sanders heads there to campaign for the South Carolina primary.

“If you need the vote down there, you have to eat boiled peanuts,” Colbert told the Vermont senator. “Have you ever had a boiled peanut, OK? The recipe is very simple.”

Sanders gracefully accepted the hospitality by chugging a beer — much to the audience’s delight — and asked: “This wins me South Carolina?”

“Yes it does,” Colbert replied. “If you like boiled peanuts, it will certainly give you a leg up in South Carolina. People up here, when I offer them this, they say, ‘Oh, here comes Colbert with more of his damp food.'”

Sanders is coming off a win in the New Hampshire primary after beating Hillary Clinton on Tuesday, making him the first Jewish candidate to win a presidential primary in U.S. history.

Sanders said afterward that his win sends a “message that will echo from Wall Street to Washington.” However, New Hampshire was considered friendly territory for the senator, who comes from neighboring Vermont, and it was largely regarded as a must-win for him in order to stay competitive with Clinton.