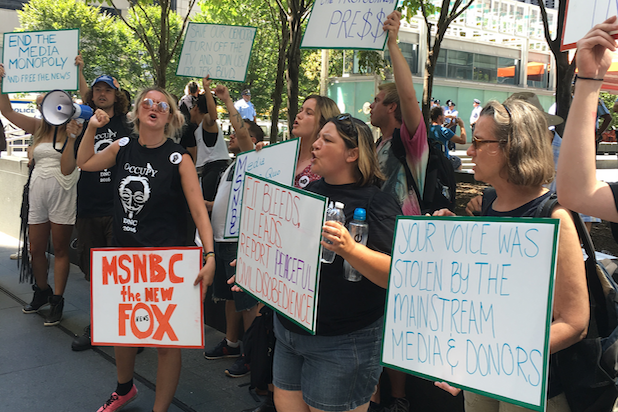 A group of Bernie Sanders supporters refuses to leave the lobby of the Comcast Center in Philadelphia in an attempt to draw attention to the way the media has covered the DNC email scandal.

“We have a contingent of friends inside who are sitting in, they have zip-tied themselves to the rail. We assert that there has been collusion and cooperation between the media, the DNC and their corporate interests,” protester Andy Argo told TheWrap.

Starbucks and other retail outlets located in the Comcast Center — which is about seven miles from the Well Fargo Center, site of this week’s Democratic convention — are closed and police are lined up, forming a wall around the building. The group of protesters outside the complex is chanting and holding up signs such as one that read, “MSNBC the new Fox News.”

Comcast is the parent company of NBCUniversal, which owns MSNBC.

Argo said the media has not been doing its job, which is to “report the truth,” having “not covered the election with objectivity.”

The DNC issued a formal apology to Sanders on Monday for leaked emails that suggested party leadership conspired against him during the primaries in favor of then-presumptive nominee Clinton. However, the apology isn’t enough for some of Sanders’ most passionate followers, who attempted to occupy the media tent outside the Democratic convention on Tuesday night over the same issue.

“A lot of the media is framing this as a political problem,” Argo said before explaining that he traveled from Kalamazoo, Michigan, to act as an “outside demonstrator” on behalf of Sanders supporters. “They say the Democrats are not uniting because of these pesky Bernie-or-busters, but it’s really about something far more fundamental than that. Something that the mainstream media seems to miss is that we are personally and horrifically offended by the way our democracy has been assaulted.”

Philadelphia police would not comment on potential arrests. Comcast is the nation’s largest cable TV operator and owns NBC, among other major networks.