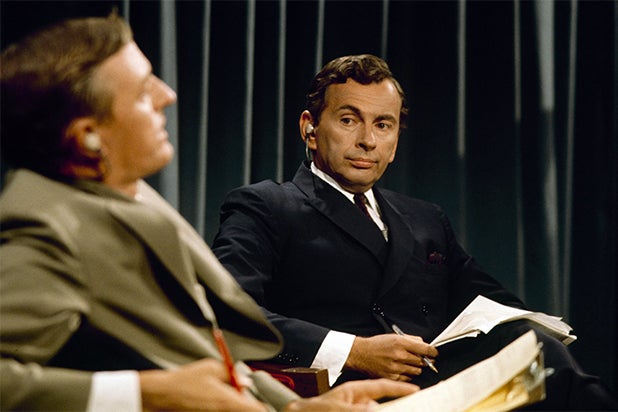 1968 was an apocalyptic year for both the right and the left. Women, blacks, students, hippies, homosexuals and anyone else shut out of the post-WWII power structure revolted en masse — and were met by anger and violence from on high. It was the beginning of the culture wars and everyone could feel doom in the air.

Two public intellectuals — Republican commentator William F. Buckley and leftist novelist Gore Vidal — attempted to sway the new order their way in 10 acerbic televised debates during the 1968 Republican and Democratic conventions. In front of the nation, the baby-faced Buckley called Vidal a drunk and a “queer” — far more an insult then than it is today, especially on national TV — while the patrician novelist smeared his conservative foe as a “crypto-Nazi” and accused him of “reveling in inequality.”

If Buckley and Vidal discussed any actual issues of the day during those debates, those scenes were abandoned on the cutting-room floor. In the not entirely convincing “Best of Enemies,” directors Robert Gordon (“Johnny Cash’s America”) and Morgan Neville (“20 Feet From Stardom”) focus on the two men’s decades-long rivalry, which was fueled as much by ideological revulsion as by personal antipathy. While rivetingly nasty, the Buckley-Vidal debates, argue the filmmakers, ultimately changed the news for the worse by ushering in our current age of political coverage as a series of screaming matches.

That’s a fascinating claim — which is why it’s bewildering that Gordon and Neville wait until the credits start rolling to bring it up. “Best of Enemies” is full of such narrative miscalculations. Because we primarily see Buckley and Vidal slinging wordy, ad hominem insults at each other in their languorous, mid-Atlantic accents — there’s mention of “balderdash” and “bloodthirsty neuroses” — they come off as aristocratic brats displaying scant evidence of the intellectual gravitas these talking heads keep insisting they exude with every breath.

There’s also too little sense of the times. A scene of Vidal discoursing with Hugh Hefner as fellow progressives on a “Playboy” TV program is an invaluable sign of how the liberal author helped usher in a movement that marched beyond him, but the film needs more jarring “Mad Men” touches like that to show how long ago 50 years really was.

In truth, Buckley and Vidal were much more similar than they were different. Boarding-school graduates and failed politicians both, the two were born in the same year, made a living as writers and thinkers and, rather obviously, were white men of enormous privilege who were invited to speak on issues like sexism and civil rights on television because they were white men.

The film’s understandable but facile nostalgia for a more civil, less fractured news ecosystem fails to take into account how much less diverse and democratic the media would still be if it hadn’t grown past the era of most Americans watching the same three networks. As a whole, the news today is full of various failures, but inclusivity of perspective and demographics — probably a worthy goal in the long run, even with extremists like Glenn Beck on the airwaves — isn’t one of them.

The nostalgia for a paternal Cronkite-like figure to unite and comfort the nation, in fact, is the kind of informed but intellectually pat vision one might expect from Aaron Sorkin, in whose work there is nearly always a right side (usually championed by an older white man) and a wrong side of a debate. Fitting, then, that Sorkin is currently developing a fictional treatment of the Buckley-Vidal skirmishes.

Divided by a flimsy table and perched in front of a crude set — just a curtain in the background, really — Buckley and Vidal nearly come to blows at one point. Buckley makes a crucial mistake in Debate No. 9, but the far more interesting story is how each of them ended up both the winner and the loser of the debates. By allying with Reagan, Buckley became a kingmaker in the Republican party in the coming decades, while the culture at large has moved increasingly toward Vidal: leftward and forward.

Neither victory was a solace to the two men, who nursed their odium toward the other into old age: In a later caricature, Vidal satirized the effete “National Review” editor, whom he believed to be a closet case, as a “compulsive sodomite.” But Gordon and Neville only skim this later bitterness, which would have been fascinating to explore in light of all that changed after the ’60s.

The news is only important insofar as it helps us understand the world. “Best of Enemies,” though, is only interested in zooming in to gaze lingeringly at the media’s navel.