The crowd pouring out of the Dolby Theatre after the Academy Awards on Sunday night was practically roaring with shock and confusion after the aborted win for “La La Land” and the corrected win for “Moonlight” in the final moments of the show.

No one had ever seen anything like it at the Oscars. Jaws were visibly agape. ABC spokesman Kevin Brockman could be seen tearing through the theater to figure out what just happened on his network’s telecast. For once, people were not checking their phones, they were looking at each other to register just how crazy what just happened was.

At the Governors Ball, where winners and losers could munch on Oscar-shaped smoked salmon, the buzz only grew louder. 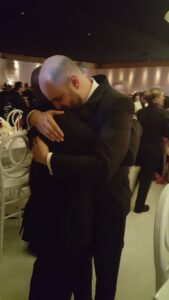 Many commented on the graciousness showed by “La La Land” producer Jordan Horowitz, handing the Oscar statue to writer-director Barry Jenkins in a show of generosity and class on stage.

“I saw the envelope,” Horowitz later told TheWrap inside the party.

“It was kind of surreal. I was glad it was the ‘Moonlight’ people because we spent a lot of time with them. I was glad I got to call Barry [Jenkins] and Mahershala [Ali]. I saw the envelope — and they won, y’know? So I corrected it. It was chaos up there. We had to set the record straight.”

Horowitz’s presence of mind did not alter the through-the-looking-glass feeling of the evening.

Also Read: How 'Moonlight' Pulled Off the Biggest, Wildest Oscars Upset Ever

For one thing, the Academy Awards had — in a single year — gone from #OscarsSoWhite to giving Best Picture to a movie with an all African-American cast about growing up in a crack-infested neighborhood.

To do so, the Academy had to turn its back on a joyful movie about its own hometown, and about the hardships of something close to their lives — making it as an actor.

Speaking of which, two of the acting category winners were African-American too — Viola Davis as supporting actress in “Fences” and Mahershala Ali for supporting actor as a crack dealer in “Moonlight.” They were just two of the record five black Oscar winners this year.

But everywhere in the wings, people were marveling at the upset that displaced the movie widely expected to claim the top prize, “La La Land.”

“You could feel it in the room,” said Lionsgate’s Patrick Wachsberger, whose studio had been hoping for its first Best Picture win. “There was a feeling for ‘Moonlight.’ You could feel people who may not even have seen it were supporting it.”

Ben Sherwood, the head of ABC, joked with gallows humor about the telecast, “It was a helluva an ending, though, right?”

He added, not joking, “It’s a good thing [the mix-up] wasn’t the other way around.” Jeff Bezos and his wife, MacKenzie, were glad they got a shout-out during the show, but Bezos said afterward, “It was just unfortunate the show ended that way.”

Nicole Avant and husband, Netflix’s chief content officer Ted Sarandos, started a gaggle gossiping about how it happened, who will be held responsible, and what it all means. “It means actresses should not marry musicians,” said actress Laura Dern, joining the gaggle, with apparent irony.

Avant, meanwhile, called Horowitz a “hero” for rescuing the moment from awkwardness to one of friendship among artists. TheWrap’s Steve Pond became a focal point for those desperate to understand how many final envelopes are prepared by PwC (two) and where the situation could have gone wrong. (According to Pond, one of the PwC executives likely handed Warren Beatty and Faye Dunaway the incorrect envelope.)

Sarandos pointed out that the evening was a first in three areas; first for streaming platforms to get four awards, first for a TV show to win an Oscar (“O.J.: Made in America”) and first massive flub.

Also Read: How Could Oscars Have Screwed Up 'Moonlight' Best Picture Moment?

But still, others speculated:

• Was it wise to ask actors in their senior years, Beatty and Dunaway, to read the final winner?

• Why did Beatty give Dunaway the erroneous card to read (and why did she take the bait)?

• And what about Matt Damon? (Just kidding about that part. Just seemed appropriate.)

In the end, “La La Land’s” Horowitz ended up in a bear hug with Jenkins at the Governors Ball, grateful for the recognition that the Academy Awards bring, but even more so – the community that it represents.