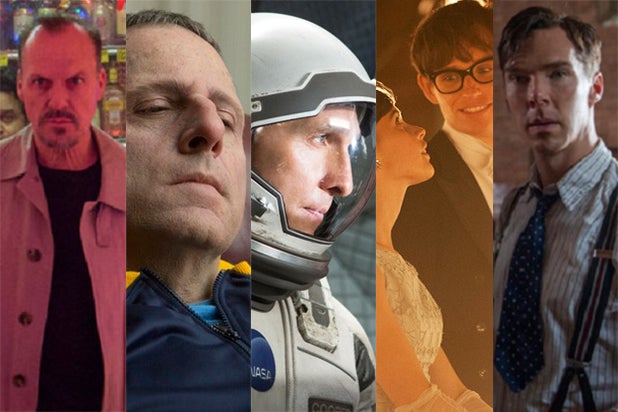 Most of this year’s likely contenders for Best Picture at the Academy Awards are going to need some help — as in an armful of Oscar nominations — if they are going to break out at the box office.

A movie doesn’t have to be a box office hit to wind up with the Oscars’ top honor. In 2009, “The Hurt Locker” famously upset James Cameron‘s blockbuster “Avatar” despite grossing just $17 million. But having commercially popular films in the race heightens interest among the mainstream moviegoers and boosts TV ratings for the ceremony. And when it comes to the bottom line, turning nominations or wins into box office grosses is a big part of the game for the studios.

Of the contenders released so far this year, “Interstellar” and “Gone Girl” have flexed the most box office muscle. Christopher Nolan‘s space epic has rocketed to $159 million domestically for Paramount and the David Fincher-Ben Affleck murder mystery is up to $163 million for Fox.

Until the list of nominees is out we can’t know for sure, but there’s a good chance those will be the only two of this year’s Best Picture candidates that will top $100 million at the domestic box office.

That would mean the class of 2014 won’t match last year when of the eight films nominated for Best Picture, four — “Gravity,” “American Hustle,” “The Wolf of Wall Street” and “Lee Daniels’ The Butler” — topped the $100 million mark at the domestic box office. And it’s a far cry from 2013, when six of the nine Best Picture nominees managed the feat and a seventh just missed.

“Many of this year’s films seem a little more specialized, and initially may not have quite as broad a reach with the mainstream,” said Frank Rodriguez, Fox Searchlight’s senior vice-president of distribution. “But that can change quickly if you get a couple of nominations and you start to get that extra attention.”

The nominations will be announced on Thursday, Jan. 15. At that point, the awards campaigns for the films that are named will kick into high gear and distribution strategies designed to maximize the buzz are fine-tuned. The Academy Awards are on Sunday, Feb. 22.

Two films that open wide on Christmas Day have a shot at nominations and might have enough mainstream appeal to hit $100 million at the box office.

Universal’s Angelina Jolie-directed “Unbroken,” the tale of war hero Louis Zamperini, is an inspirational story that could play broadly and his been in the Best Picture discussion for months. Disney’s Broadway musical adaptation “Into the Woods” appears to have the box office chops, but isn’t a lock for a nomination.

Several movies currently in release have shown enough early box-office strength and buzz to be in position to get a big lift  if and when the nominations come, but are unlikely to make it to $100 million.

Fox Searchlight’s “Birdman,” starring Michael Keaton, is at $18.9 million after eight weeks, and has spent the last four weeks in the overall top ten films. The box office question with director Alejandro Iñárritu’s smart and darkly satirical Broadway tale —  as it is with several others — is will it play in Peoria?

The same goes for Sony Pictures Classics’ Steve Carell-Channing Tatum murder saga “Foxcatcher,” which has started solidly with $2.8 million after three weeks of limited release. The well-reviewed drama based on the true life tale of millionaire John du Pont and wrestlers Mark and Dave Schultz is tough stuff thematically, which can make connecting with the mainstream challenging.

Also read: Channing Tatum on Journey From Special Ed to Stripping and Stardom: 'I Like Being Pushed Into Corners'

Richard Linklater’s 12 years-in-the-making drama “Boyhood” was released in July and has brought in $24 million for IFC Films. It’s nearly out of theaters, but if it gets the nominations that many are predicting — coupled with some critics awards — IFC will certainly consider another run.

The Stephen Hawking biopic “The Theory of Everything” is up to $13.6 million for Focus Features after five weeks. It was seventh nationally this past weekend with $2.6 million from 826 theaters, after breaking into the top ten with $5 million last weekend. Focus plans to add roughly 200 theaters on Friday, then wait to see what happens with nominations.

“It’s in a good spot,” BoxOffice.com vice-president Phil Contrino said, “especially if the lead actors (Eddie Redmayne and Felicity Jones) get nominations, too.”

“The Imitation Game,” the Benedict Cumberbatch-Keira Knightley drama about British cryptologist Alan Turing, debuted with an eye-popping $120,000 per-screen average in four theaters for the Weinstein Company two weeks ago. It followed that up with a strong second weekend, averaging $50,196 in eight theaters and could land nominations for its leads as well.

TWC plans to take “The Imitation Game” nationwide on Friday.

“We’d love to see this one follow the same sort of path that ‘The King’s Speech’ did,” distribution chief Erik Lomis said. That film, a British import like “Imitation Game,” won the Best Picture Oscar in 2010. Of the $135 million in domestic grosses that “The King’s Speech” ultimately brought in, $56 million came in after the nominations.

“It’s a matter of making people aware of the film, and then letting the picture speak for itself,” said Lomis.

Not just Best Picture hopefuls can benefit; nominations for high-profile lead roles shine an added spotlight on their films that can translate at the box office, too.

Fox Searchlight’s woman-in-the-wilderness saga “Wild” opened in limited release this weekend and averaged a strong $30,000 in 21 theaters. It will be looking to build momentum over the next several weeks and a nomination for star Reese Witherspoon could kick-start it. The Chernin Entertainment’s comedy “St. Vincent” has taken in roughly $40 million since October for distributor TWC, and a nomination for star Bill Murray could give it new life as well.