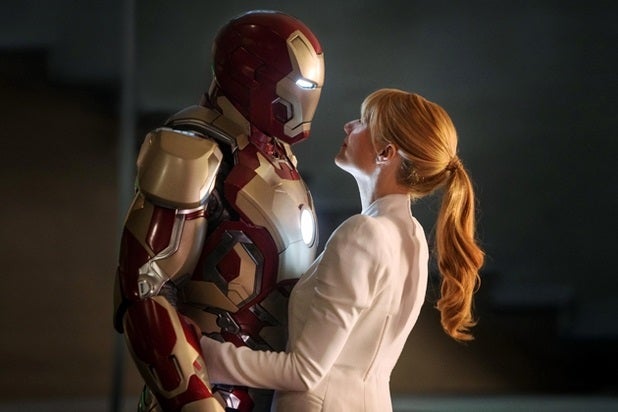 Winner: Disney's "Iron Man 3" played like a sequel to "Marvel's The Avengers" and was the year's highest-grossing movie with $1.21 billion worldwide. It helped Disney post its best box-office year ever, with more than $4 billion globally. 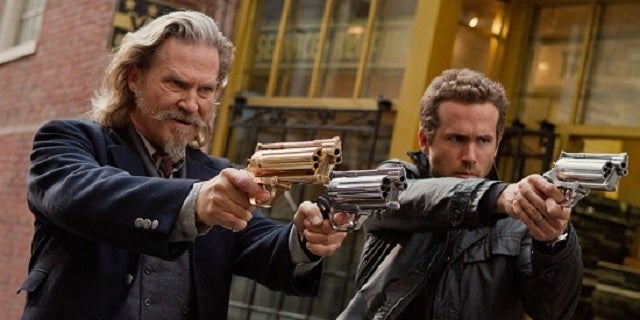 Loser: It had Jeff Bridges and Ryan Reynolds as undead lawmen, but Universal's comic book adaptation "R.I.P.D" bombed with $78 million globally -- less than half its production budget -- this summer. 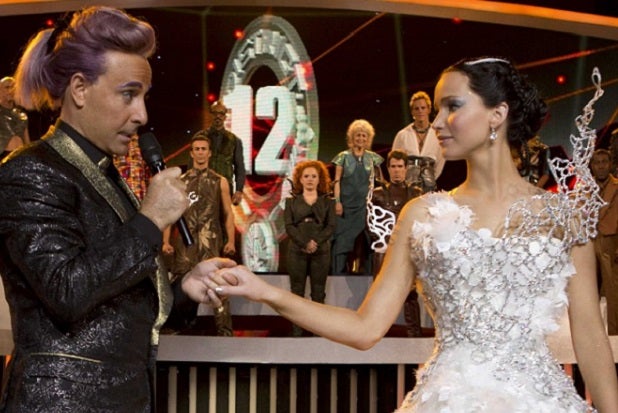 Winner: "The Hunger Games Catching Fire" has taken in nearly $735 million worldwide since launching last month for Lionsgate. Katniss and Co. have done it without the benefit of 3D upticks, and the overseas haul should easily top the original's.

Loser: Despite director Walter Hill, Sly Stallone and that catchy title, the R-rated action film "Bullet to the Head" missed the mark badly in February.

Winner: With $918 million worldwide, Illumination Entertainment's Aanimated family film "Despicable Me 2" became Universal's most profitable movie ever. The film's minions will be back in their own movie next summer.

Loser: Disney hoped Jerry Bruckheimer and Johnny Depp's "The Lone Ranger" would do for Westerns what "Pirates of the Caribbean" did for the skull-and-crossbones set. But the pricey summer tentpole fizzled, forcing a major writedown and sending Bruckheimer packing for Paramount.

Winner: Driven by Vin Diesel and the late Paul Walker, "Fast & Furious 6" became by far the franchise's most lucrative entry with $789 million, and helped Universal to its best box-office year ever.

Loser: Roland Emmerich's "White House Down" had Channing Tatum and Jamie Foxx, but FilmDistrict's "Olympus Has Fallen" had the same plot and was a hit months earlier, so Sony's summer epic flopped.

Winner: In June, "Monsters University" became the 14th consecutive Pixar movie to open at No. 1 in the U.S. with an $82 million three-day haul. It went on to take in $744 million globally.

Loser: Director Bryan Singer's "Jack The Giant Slayer" opened at No. 1 with $28 million in March for Warner Bros., but that was beans compared to its $200 million production budget.

Winner: Henry Cavill and "Man of Steel" opened with a mighty $116 million in June and brought in $662 million worldwide. More importantly, it set the stage for the upcoming Warner Bros.' Batman-Superman movie and, presumably, a Justice League franchise.

Loser: Former Fresh Prince Will Smith was hoping son Jaden could ascend to his box-office throne with "After Earth," but the $130 million sci-fi epic never took off at the box office.

Winner: Melissa McCarthy and Sandra Bullock had the year's highest grossing comedy and the year's biggest R-rated movie in Paul Fieg's buddy-cop romp "The Heat." It brought in $159 million domestically and $230 million worldwide for Fox.

Loser: The ripped-from-the-headlines story of Wikileaks founder Julian Assange wasn't helped when he disowned the Disney biopic a week before it opened. It flopped in the U.S. and abroad and topped out with less than $9 million.

Winner: The animated cave family film "The Croods" was huge overseas and brought in more than $400 million from abroad, more than doubling its U.S. haul.

Winner: Alfonso Cuaron's 3D space epic blasted off in October with a stunning $55 million first weekend, and the Sandra Bullock-George Clooney thriller has rocketed to more than $600 million worldwide.

Loser: Jim Carrey stopped promoting the ultra-violent "Kick Ass 2" in the wake of the Sandy Hook school shootings. How much that hurt isn't clear, but the Chloe Moretz teen thriller was a summer disappointment for Universal.

Winner: "Thor: The Dark World," Disney's second post-"Avengers" sequel, is on its way to $650 million at the worldwide box office. The Marvel sequel starring Chris Hemsworth opened to $86 million in the U.S. in November.

Split decision: "The Smurfs 2" opened in June and took in $71 million in the U.S. -- about half off what the original film did -- and it came up short overseas, too. More than $150 million in corporate tie-ins helped, however, and Sony will bring the little blue guys back next summer.

Winner: This R-rated Jennifer Aniston-Jason Sudeikis pot comedy was one of summer's biggest surprises, and has taken in nearly $270 million worldwide for Warner Bros.

Loser: Hollywood has been chasing the next big young-adult franchise for years, and Sony hoped that "Mortal Instruments: City of Bones" might be it. A soft U.S. opening and a global haul of $80 million made clear that wouldn't be the case.

Winner: "Jackass Presents: Bad Grandpa" may have toned down the mayhem, but Johnny Knoxville still packed a box-office punch. His turn as 86-year-old Irving Zisman topped $100 million for MTV Films and Paramount.

Loser: "Carrie," a remake of the 1976 Stephen King classic, was the only horror film in the marketplace at Halloween. But the tale of the testy telekinetic teen scared up just $61 million worldwide.

Winner: New Line's horror film "The Conjuring" pulled a shocker when it doubled its $20 million production budget on its first weekend in July. It went on to take in $316 million worldwide and landed director James Wan the keys to "Fast and Furious 7."

Loser: Turns out everything Tyler Perry touches doesn't turn to box-office gold -- especially if he produces but doesn't appear in the movie. That was the case with the family comedy "Tyler Perry Presents The Peeples," which bombed in May.

Winner: As directing debuts go, "This Is the End' was a doozy for Seth Rogen and Evan Goldberg. Their R-rated summer comedy about young celebs partying hearty through the apocalypse, made for $32 million, has brought in $125 million for Sony.

Loser: Universal's rom-com "Admission" featured Tina Fey as a college administrator and co-starred Paul Rudd, but it landed with a $6 million thud.

Winner: It took some nerve for Disney to redo the classic "Wizard of Oz," but it paid off when James Franco went over the rainbow to nearly $500 million globally in "Oz the Great and Powerful." No word of a sequel, though.

Loser: Young pop star Selena Gomez may yet break out on the big screen, but "The Getaway," a thriller co-starring Ethan Hawke, was DOA when it landed in August.

Split decision: Director J.J. Abrams' "Star Trek: Into Darkness" failed to match its predecessor's domestic total with $228 million, but outdid it overseas with $238 million for Paramount.

Loser: "Governator" Arnold Schwarzenegger made his big screen return from politics in the R-rated action film "The Last Stand,'" but audiences elected to stay away in January.

Winner: Summit Entertainment's magic-themed heist thriller "Now You See Me" was a domestic hit with $117 million, but its $234 million overseas haul was even more impressive. Its top foreign market was director Louis Leterier's homeland France.

Loser: Robert De Niro and Michelle Pfeiffer were the heads of a mob clan laying low in Luc Besson's "The Family," but audiences couldn't find them either. At one point, Relativity considered "'Badfellas" as a title, which might have helped.

Split decision: The domestic haul for Fox's Hugh Jackman superhero saga "The Wolverine" was the lowest of the "X-Men" movies, but its $282 million overseas total was the series' best.

Split Decision: Guillermo del Toro's giant robot sci-fi fantasy "Pacific Rim" barely clanked past $100 million in the U.S., but it took in more than that in China and offset most of its $190 million budget with a $300 million foreign haul.

Loser: Teen sci-fi thriller "The Host" was based on a young adult series written by "Twilight" author Stephenie Meyer, but Bella would have laughed at this film's box office numbers.

Split Decision: Sony's Matt Damon sci-fi action film "Elysium" opened at No. 1 in the U.S. in August but couldn't hit $100 million. Its $193 million in foreign grosses helped offset that.

Split decision: "Turbo" didn't hit box office heights in the U.S., but the tale of a snail with the need for speed did OK overseas and significantly helped DreamWorks launch several ancillary platforms.

Winner: Low-budget horror-meister Jason Blum was at it again with "Insidious 2," which cost $5 million to make and brought in $158 million globally. That's a scary-good profit margin.

Winner: Denzel Washington and Mark Wahlberg blasted away in "2 Guns," one of eight films to open at No. 1 in the U.S. for Universal in 2013.

Split decision: "The Hangover Part III" lost its Labor Day box-office showdown with "Fast and Furious" and its $112 million U.S. gross was less than half of the previous film. The Wolfpack rolled up $238 million abroad, however.

Winner: Baz Luhrman and Leonardo DiCaprio's "The Great Gatsby" dazzled with a $55 million May opening and went on to take in nearly $350 million worldwide for Warner Bros.

Loser: "The Internship" starred Vince Vaughn and Owen Wilson as aging salesmen trying to cut it in a digital workplace, but it played too much like a Google ad for some.

Split decision: Bruce Willis blew up much of Moscow in "A Good Day to Die Hard." It lost a Valentine's Day battle with "Safe Haven" and underwhelmed in the U.S., but took in $237 million abroad.

Loser: How much author Scott Orson Card's anti-gay marriage comments hurt "Ender's Game" we'll never know, but the sci-fi tale of a kick-ass kid saving the planet couldn't break out despite opening at No. 1 in November.

Winner: Tom Cruise was on familiar sci-fi footing in "Oblivion" and audiences bought it. It topped out at $89 million domestically after opening at No. 1 in April, but doubled that total overseas.

Winner: The thriller “Prisoners” starred Hugh Jackman, Jake Gyllenhaal and Viola Davis and is up to $118 million worldwide, not bad given its $46 million budget.

Winner: Mexican TV star Eugenio Derbez helped Pantelion Films score its biggest hit ever with "Instructions Not Included." The highest-grossing Spanish-language film ever in the U.S. has brought in $44 million since opening in August.

Loser: Charlie Sheen, Amber Heard and even Sofia Vergara in a machine-gun bra couldn't save Danny Trejo's "Machete Kills" from bombing in October.

Winner: A high-profile fight over the title didn't seem to hurt the Weinstein Company's "Lee Daniels' The Butler," which held the No. 1 spot nationwide for three weeks in August. Oprah Winfrey's huge following didn't either. It's made $116 million in the U.S.

Loser: The sketch-comedy "Movie 43" featured Halle Berry, Hugh Jackman, Kate Winslet and a raft of other stars. The critics attacked and it was out of theaters soon after opening to a measly $4.8 million.

Winner: Woody Allen's dark comedy "Blue Jasmine" established Cate Blanchett as a frontrunner int the best actress races, and took in nearly $33 million for Sony Classics along the way since opening in July.

Loser: With Lindsay Lohan starring, Bret Easton Ellis writing and Paul Schrader directing, "The Canyons" generated tons of pre-release buzz. But it barely registered a blip at the box office.

Winner: Great things may lie ahead as "12 Years a Slave" heads into the awards season, but Fox Searchlight's slavery saga -- made for $20 million -- is already a box office hit with $36 million and counting.