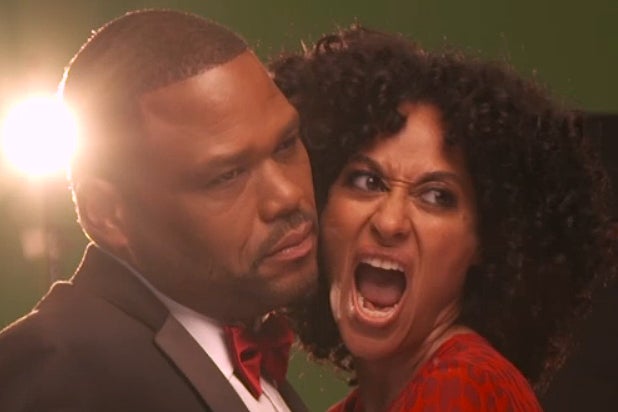 With the 15th Annual BET Awards right around the corner, Anthony Anderson is fine tuning his singing, dancing and hosting skills.

A native of Compton, California, the 44-year-old Anderson has been building up his Hollywood credentials for two decades. After appearing in a string of TV shows and films including “Barbershop,” “Malibu’s Most Wanted” and “Hustle & Flow,” ABC’s breakout comedy “Black-ish” boosted Anderson’s star status, leading to the BET Awards gig.

Come Sunday, the comic actor says he and Ross will bring a lot more than just laughs.

“We gon’ sing, we gon’ dance, we gon’ tell jokes. We gon’ do all that! We will give you all your standard fare for any awards show,” he said. “But there are some gems that we’ve added to the crown that people are gonna be pleasantly surprised to see shine.”

Nicki Minaj and Chris Brown lead the BET Awards nominations, with six nods each, and both are set to perform. Among the other musicians slated to belt out their hits are Robin Thicke, Janelle Monae and Jason Derulo. Meanwhile, Janet Jackson is set to receive the inaugural Ultimate Icon: Music Dance Visual honor. Smokey Robinson will be honored with the Lifetime Achievement Award and radio legend Tom Joyner will receive the Humanitarian Award.

“This is gonna be the best BET Awards show that people have seen in a loooonnnng time,” Anderson promised. “Some magic is just happening on this show and some things that are surprises that I can’t even disclose. But trust and believe, there are going to be some magical moments in this show.”

Although he cautions, don’t expect this year’s hosts to deliver punch lines at the expense of BET’s celebrity guests.

“That’s not really our thing. I’ve never really wanted to make fun of people … We’ll more so make fun of ourselves and be the butt of our own jokes before we’ll make a joke about someone else.”

Rock also delivered a ton of the eyeballs. The show scored 7.9 million viewers, making it cable’s most-watched awards fest of the season, and the second-highest rated BET Awards in history, trailing only 2009’s show, which played out as a tribute to Michael Jackson.

When reminded that he’s got big shoes to fill, Anderson said he’s not concerned at all.

Still, he did recently take time to have a heart-to-heart with Rock.

“He gave me his support and we’re just gonna rock out and do what we do. We’re going to leave it all on the stage, and it’s up to the public to accept what we do and embrace it.”