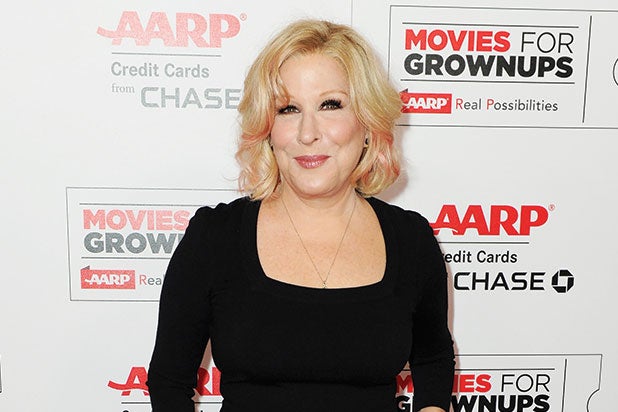 Midler posted a photoshopped picture of herself holding a cardboard sign that reads, “Like Kim … Put your selfie to work for a good cause! Join mewww.crowdrise.com #stagesforsuccess.” A mirror shows Midler’s photoshopped posterior covered in underwear.

Midler’s caption on Twitter read, “@KimKarashian Put your selfie to work… for a good cause. Donate, RT, I’ll match $$2-1!”

.@KimKardashian wants me to send her my nudes! I'll send them right over but the lighting's bad right now since she threw all that shade!

Midler and Kardashian got into a little bit of a Twitter tiff on Monday after the reality star posted a nude selfie with the caption, “When you’re like I have nothing to wear LOL.”

Midler had a smart response to the “Keeping Up With the Kardashians” personality’s gratuitous pose in her bathroom mirror, posted Sunday.

“Kim Kardashian tweeted a nude selfie today. If Kim wants us to see a part of her we’ve never seen, she’s gonna have to swallow the camera,” Midler, 70, tweeted.

Kardashian wasn’t going to take the social media jabs quietly, however, and responded to the “Hocus Pocus” star with a passive aggressive tweet later in the evening.

“hey @BetteMidler I know it’s past your bedtime but if you’re still up and reading this send nudes #justkidding,” she wrote. “I really didn’t want to bring up how you sent me a gift awhile back trying to be a fake friend then come at me #dejavu.”