When Goodman returned, 16 months later, in the spinoff “Better Call Saul,” Goodman was indeed managing a Cinnabon. Whether it was the best or worst-case scenario for Goodman is unclear, but it’s worked out great for AMC and Cinnabon. The beloved cinnamon-bun chain has teamed up with AMC’s “Better Call Saul” since the show’s start, resulting in one of the most unique television business partnerships in recent memory.

As we look forward to the Season 3 premiere of “Better Call Saul” Monday, we spoke with a Cinnabon executive about how the unlikely partnership happened. It’s a take as twisty and multilayered as — well, you know.

Odenkirk’s line about Cinnabon in “Granite State” caught the attention of the mall foodcourt staple’s opportunistic social media team. Eleven minutes after the closing credits, the clever Cinnabon social gang tweeted Odenkirk. “When you’re ready,” they wrote, with a link to the Cinnabon Careers page:

Well, apparently executive producer Melissa Bernstein was ready — several months later. Bernstein reached out to Cinnabon to share news that they were creating a Saul-centered spinoff, said Jill Thomas, vice president of Global Marketing for Cinnabon. (Saul still goes by the name Jimmy McGill in the prequel, for reasons we’re not going into here.) 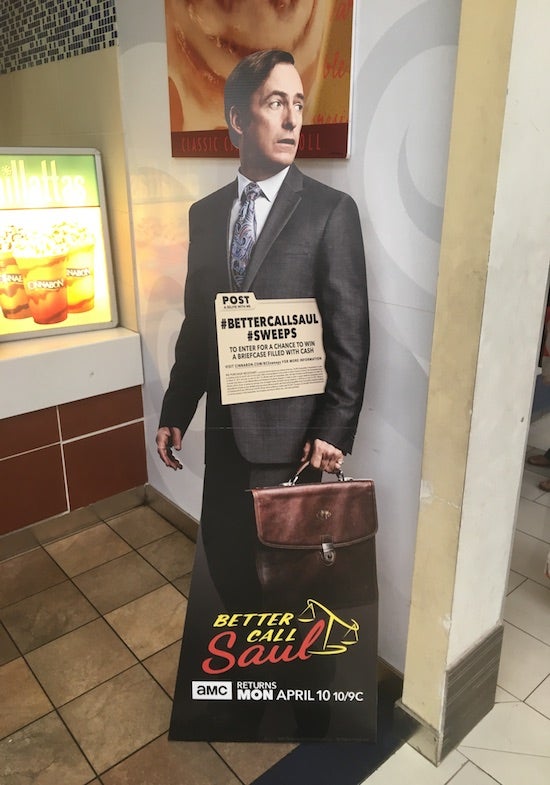 Peter Gould, the co-creator of “Better Call Saul,” has said that the original Cinnabon line was a “throwaway” — that is, until the tweet. And since you’re wondering (like we were), it turns out that no, Cinnabon wasn’t insulted by the hopelessness of Goodman’s reference.

“If you truly understand the character you know that no matter where he is, it’s a purgatory for him — because he isn’t able to be his true self,” Thomas told us. “Even if he was in a high-rise in a big city he would still be in Hell. So we never saw it that way at all, and never second-guessed our participation.”

Poor Jimmy. Or should we call him “Gene”? After all, that’s what Cinnabon does — and that’s the alias under which Odenkirk actually trained.

Oh, did we not mention that? The sketch comedy legend actually worked at a Cinnabon, and did the whole thing “in character as ‘Gene,'” Thomas said. Odenkirk was coached up by the airport staple company’s most tenured corporate employee, Deb Rowley, who started her career as the very first Cinnabon bakery manager in Seattle, Washington, in 1985.

“Bob went through significant training as any bakery employee would, although he had private lessons,” Thomas explained. “He has shared that it’s a great source of pride that he knows how to make a ‘real, authentic Cinnabon.'”

At this point we should point out that no money has exchanged hands to or from either side of this deal, further making it a unique sponsorship. This season, “Saul” (Gene/McGill/Odenkirk/AMC) and Cinnabon are taking their relationship to the next step.

First, they’ll do so with (very minor spoiler alert) a new Cinnabon sequence, which viewers will see shortly. We asked Thomas how much is in the can.

“Extensive footage was filmed over several days, but it has been edited down to approximately three minutes in the first episode of each season. This season it seemed to us that it was more substantial than in past years. But we are not ‘in the know,’ just fans of the show so we are only speculating — which is fun!”

And on the promotional side, the bakery got to drop a fresh Season 3 preview to fans, and is also giving away Saul’s briefcase stuffed with cash and other “personal belongings.” Plus, Cinnabon is handing out free BonBites from 5-7 p.m. today, linked to tonight’s premiere. Sweet deal, indeed.

A few ”Better Call Saul“ faces are familiar, but others are very deep pulls