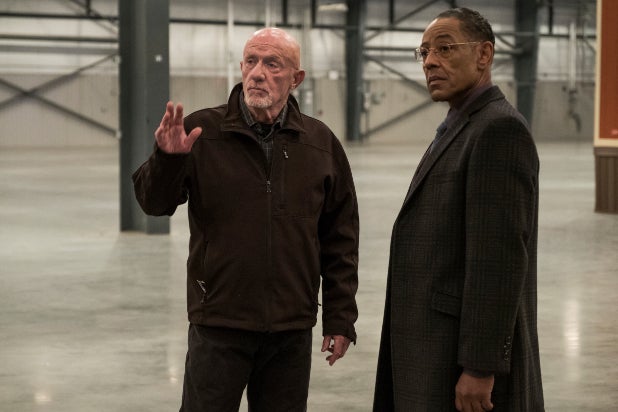 Gus and Mike have some making up to do when “Better Call Saul” returns for its fifth season next year.

While the finale of the “Breaking Bad” prequel’s fourth season will be remembered for showing Jimmy McGill’s (Bob Odenkirk) final descent into Saul Goodman, it also left Mike Ehrmantraut (Jonathan Banks) and Gus Fring (Giancarlo Esposito) in a bad spot.

“They ended on a hard note,” Esposito told TheWrap. “Certainly, things will be strained, and Mike hasn’t given his allegiance over to Gus completely.” By the time “Breaking Bad” rolls around, Mike is Gus’s right-hand man and arguably his most-trusted employee, so it’s clear that next season the two will have to iron some things out between each other.

“Better Call Saul” showed that, at least at one point, Mike had a bit of softer side, especially when it came to Werner (Rainer Bock), whose German-based construction crew was hired to build the infamous “Superlab” where Walter White (Bryan Cranston) and Jesse Pinkman (Aaron Paul) do most of their meth cooking. But multiple setbacks and Werner’s transgressions — which included drunkenly talking about the project at a bar and escaping so he could spend a weekend with his wife — forced Mike’s hand. He had to execute Werner, but not before viewers saw just how displeased Gus was with Mike’s handling of the whole operation.

“There’s going to be some moves that have to be made, some conversations between Mike and Gus that either repair, or don’t repair, the relationship. That comes down to some moral questions that may come up between both of them about how can Mike ever work for Gus,” Esposito continued. “If you asked me, from my experience on ‘Breaking Bad’ and going into ‘Better Call Saul,’ I feel like they’re similar men. But Gus is smart, and he knows he needs someone smart, and who is not only smart, but not afraid to take action. I love the moments that you have seen thus far up to now, where we’re left at a place where ‘Oh, these guys are prickly with each other.’ Look to see how that gets ironed out in Season 5.”

“Better Call Saul” is not expected to return for its fifth season until next year. Co-showrunner Peter Gould previously told TheWrap he thinks the show is coming very close to the end of the line — after all, it finally paid off on its premise: How Jimmy McGill ends up practicing law under the name “Saul Goodman.”

“I couldn’t tell you exactly how many episodes there are [left], but I think we’re closer to the end than we are to the beginning,” said Gould back in October, admiting that he and co-showrunner (and “Breaking Bad” creator) Vince Gilligan are working on the “Saul” endgame.

Before Bravo’s “Dirty John” debuts, TheWrap looks back at some of TV’s least trustworthy characters