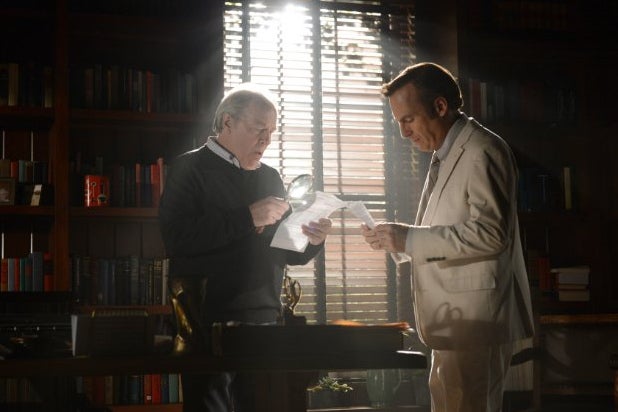 OK, so we (on the East Coast, at least) now know that Chuck McGill didn’t die on the “Better Call Saul” Season 2 finale — but going forward, he’s poised to be about as dangerous to little bro as any “Breaking Bad” universe baddie.

Having tricked Jimmy (Bob Odenkirk) into admitting to a felony — tampering with evidence — in the Mesa Verde case, Michael McKean‘s Charles currently holds all the familial cards. Will he get his younger brother disbarred — or perhaps even locked up again? Will he ruin Jimmy’s new practice, screwing up Kim’s effort in the process? Or will Chuck just cut a deal forcing his sibling to never practice law under the McGill name again, officially birthing the “Breaking Bad” criminal lawyer we know as Saul Goodman?

TheWrap spoke to the actor about exactly those questions, as well as others. The truth is, McKean has no idea where his character is going, which is typical in Vince Gilligan‘s “Breaking Bad” universe. (For example, all the ex-“SNL” star knew going into the series was that for some reason or another his Chuck didn’t want Jimmy practicing law under the McGill name.) He sure didn’t scoff at our “Breaking Saul” theory, however.

Oh, and sorry about that whole headline thing — spoilers, ya know? In case you missed it, on Monday night’s episode, Chuck and Jimmy’s mom passed away in a well-placed flashback.

The guy who lends his face, body and voice to Chuck knows that his character is at a crossroads, and the decision he’s set to make could place him in Tuco Salamanca territory — minus the guns and violence, of course.

“One alternative is kind of an intellectual one, and that’s not really the way we have families,” McKean said of villainous archetypes. “Families are emotionally connected — and that’s in both positive and negative ways.”

So, yeah, maybe Chuck’s a bad brother — but McKean doesn’t think he’s a bad guy. After all, Charles McGill, Esq. is a great attorney, a law-abiding citizen, a responsible man.

“I’m the good guy,” McKean told us. “I have to think that way. Otherwise it wouldn’t be interesting.”

That’s a good acting trick. We asked McKean about another one — what he draws from to pull out Chuck’s physical pain, which may be very real, or could be completely imaginary.

“It is what[ever] I need to feel,” McKean said simply. “I’ve felt a lot of things: I’ve had migraine headaches, I have joint pain — I was hit by a car and broke my leg. I know what it’s like to be on that gurney.”

“When you’re being pushed though the halls of the hospital — even if there’s a camera crew around you — it still has that ‘What next?’ feel to it,” McKean elaborated on his scary early season finale moments.

“Better Call Saul” already has a Season 3 renewal, though no debut date or plot lines have been announced yet.